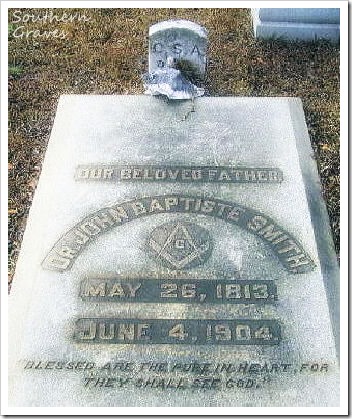 At the home Sunday morning the funeral services were conducted by Rev. T. E. Davenport, pastor of the Perry Methodist church.

The Houston Lodge No. 35, F. & A. M. with visiting Masons, took charge of the body, and at Evergreen cemetery the rites of burial were performed with Masonic honors.

Six Knights Templar of Fort Valley acted as an escort of honors.

Dr. Smith was 91 years of age nine days prior to his death.  He was the oldest white man in Houston county, and no man in the county was ever held in higher esteem.

He is survived by the devoted wife and three daughters, Mrs. J. H. Powers of Perry, Mrs. S. H. Morgan of Atlanta and Mrs. B. C. Holtzclaw of Perry.  There are also seven grand-children and four great-grand-children.

Attending the funeral and burial there were Masons and other friends of the family from Hawkinsville, Elko, Fort Valley and other sections of the county.

The floral offerings were magnificently beautiful, completely covering the top of the casket and in accord with the desire of the family, these beautiful emblems were buried with him to whose honor they were silent tributes.

Dr. John Baptiste Smith was born May 26th, 1813, at Budeshire, Germany, graduated at Marsburg, Germany, came to the United States in 1848, was married to Mrs. Matilda Blackman in Charleston, Tenn., and from that place came to Perry, Ga., in 1863.

He was a Royal Arch Mason and Knight Templar.  In 1863 he served as surgeon in Gen. J. C. Vaughn's Tennessee Brigade, and in 1864 he was assistant surgeon in the McFarrin hospital at Forsyth, Ga.

Though he retired from the practice of medicine several years prior to his death, he took the same interest in the profession as he had demonstrated during the many yeare [sic] of his successful practice, and read his medical journals regularly until his eyesight failed.

Though confined to his room more than a year, and to his bed several months, it was not disease, but the weight of more than four score well-spent years that prevented his daily intercourse with business people whose utmost confidence he had earned by many years of upright living in their midst.

Of this perfect gentleman and friend of many years, we can but repeat that which we wrote last week in calling attention to his 91st birthday.

Never of robust physique, he was strong because he had learned to subdue his passions and control himself.

For forty years our people have known him, and in all that time no word of reproach has been uttered against him.  Morally his life was a model.  For fully forty years this writer has known him, and in his intercourse with our people, professionally and socially, we know not that he has ever uttered a word in anger, or given expression to a vulgar or impure thought.

Having attained by reason of moral strength a score and one more than the allotted years of man, he deservedly held the implicit confidence of all those who knew him.

Of far greater value than much gold is his good name, and to his children and grandchildren his example will ever be a priceless heritage.