Minor Havis was born 23 April 1829 in South Carolina.  He became a resident of Georgia as a young teenager. 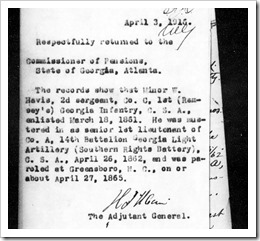 From his Confederate service record at Fold3:

After the Civil War, M. W. Havis occupied himself as a physician and farmer in Perry, Houston County, Georgia.  Some time after 1875, he and his wife adopted a nephew, Minor W. Hall, as their son.  Toward the end of November in 1889, Dr. Havis was accidentally shot by a local merchant.  Though it was initially believed he would survive, Dr. Minor W. Havis died a few days after the incident, 27 November 1889. 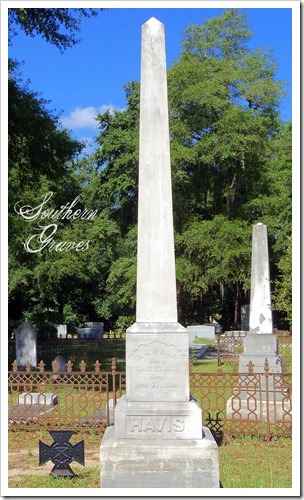 At about twelve o'clock Tuesday night, November 26th, Dr. M. W. Havis died at his residence in Perry, from the effects of a wound accidentally received last Friday morning.

The interment took place at Evergreen Cemetery yesterday afternoon.  Dr. Havis having been an honorary member of the Perry Rifles, and that command being honorary members of the 1st Ga. Reg. Veterans' Association, of which he was an active and esteemed member, he was buried with military honors.

Six ex-members of the Southern Rights Battery, of which company Dr. Havis was Captain, acted by request as pall-bearers.

There were no cartridges in the pistol chambers when it was being examined, but Mr. Lawson replaced them when the pistol was returned to him.  Dr. Havis turned toward the street, still standing in the door, and began talking to Postmaster McD. Felder.  Mr. Lawson stood about five feet from Dr. Havis, and began rubbing off the weapon, then suddenly an accidental revolving of the chambers discharged the pistol, and the bullet entered the person of Dr. Havis, about an inch to the left of the spine, passing through the bone near the hip bone.  Dr. Havis then started to walk home, but stopped at the post office.  There in a short while Drs. J. B. Smith, C. R. Mann, H. M. Holtzclaw, L. A. Felder, of Perry and Dr. Joseph Palmer, of Oak Lawn attended him.  The bullet was probed for, but not extracted, though ascertained to be in the abdomenal [sic] cavit[y].  Afterward, about an hour after the wound was received, he walked about 300 yards to his residence, accompanied by the physicians and several other friends.

At first the wound was recognized as a serious one, though a fatal result was not anticipated.  Dr. Havis contended that the bullet was in his bowels, but he was convinced to the contrary.

At home he was constantly attended by the physicians, with the utmost care and skill, and several of his closest friends were with him during each day.  At night two doctors were with him.

With the deepest solicitude the people asked often about his condition, and at no time, except possibly early Monday night, was death apprehended.  He slept well the latter part of that night, and at noon Tuesday it was believed, and Dr. Havis so expressed himself, that the crisis had passed and that he would recover.  Drs. Smith and Felder were with him Tuesday night, when at 11 o'clock a change occurred, at at 12 he was a corpse.

Dr. Havis was 60 years old last April, had been a resident of Perry about 50 years, and began the practice of medicine about 38 years ago.

He was a man of thorough education, exceptionally able in the knowledge and practice of his profession, and of very strong convictions.  Possessed of indomitable will, he was remarkably well preserved for a man of his age.  He was a man of strict integrity, with an exceeding high regard for justice.  Thoroughly honest in word and deed, he was charitable always, though sometimes apparently harsh.  No man we ever knew possessed the confidence and esteem of his friends in a higher degree, and all who knew him were his friends.

He was consistent member of the Presbyterian Church, a true Christian, a good man in the highest sense.  He leaves of his immediate family a heart-broken widow and a nephew, who is an adopted son.  His other relatives are five sisters and their families.

The profoundest sorrow prevails, for the community loses one of its best citizens, and our people a strong and steadfast friend.  The be reaved [sic] ones have the profoundest sympathy of all our people.

A good man has been called to his reward.

Minor W. Havis, M.D., was born in Winnsboro, SC, April 23, 1829. His ancestors were of Welsh and English birth, came to America about the middle of the eighteenth century, and settled in South Carolina; both of his grandfathers figured conspicuously in the Revolutionary war. His father, Jesse D. Havis, was born in South Carolina, in 1798. About 1836 he removed to Chambers County, Ala, where he lived until 1843, when he removed to Perry, Houston County, Ga, where he died in 1876. His wife, Sophia C. (Winn) Havis, was born in Winnsboro, SC (the place named for her father, Maj. Winn), in 1806, and died in Perry, Ga, in 1849. Of the eight children born to Jesse D. and Sophia C. Havis, the subject of this sketch is the eldest. He was educated in both Alabama and Georgia and finished his education in Macon in 1846. He then took up the study of medicine with a view of entering the navy, but after graduating in medicine in 1851 from the Jefferson Medical College at Philadelphia, being an only son, his brother dying in 1850, and his father infirm, he abandoned this idea and commenced the practice of his profession in Perry, and continued the same until April, 1861, when he joined the Confederate army as sergeant in Company C, First Georgia regiment of volunteers and served with that command until 1862, when the regiment disbanded; soon afterwards he joined Palmer's artillery as first lieutenant, and in November, 1862, was promoted to be captain until the close of the war. He then returned to Perry and resumed the practice of his profession and has been constantly and lucratively engaged in the same every since. He has been a member of the State Medical Association since 1852 and is one of the leading practitioners in southwest Georgia. April 5, 1855, he was married to Miss Cornelia Riley, daughter of Jacob Riley, of Houston County. This lady died June 29, 1856, and November 20, 1857, the doctor was married to Mrs. Argenta A. Riley. Dr. Havis is a deacon in the Presbyterian Church. He is a gentleman alive to the interest of church and State, liberal to a fault, the life of the social circle, in politics an uncompromising Bourbon Democrat, a devotee to the old South, and takes Jefferson Davis as the true exponent of pure Democracy and the embodiment of all that is chivalrous and patriotic.

Darla M Sands said…
What a shame. It seems he was an extremely valuable member of the community.
January 20, 2017 at 9:51 AM