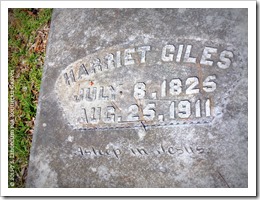 A short while after midnight of last Thursday, August 24th, Mrs. Harriett Jenkins Giles departed this life at the home of her daughter, Mrs. C. F. Hemingway, in Perry.

The burial was in Evergreen cemetary [sic] Friday afternoon, attended by loving relatives and a large number of friends.  She was buried beside the grave of her husband, who died 45 years ago.

The years of her life were 86, she having been born in Roberson county, North Carolina, July 8th, 1825.

She was the daughter of Rev. Sam Jenkins and Mrs. Ann Drake Jenkins, the 5th of the family of 11 children.

With her parents she came to Houston county in 1830.  On October 2nd, 1839, she was married to Mr. John Mason Giles, and of that union there were 11 offspring.  There have been 29 grand-children and 6 great grand-children.

In 1907 she wrote concerning her ancestors.  Of her grandfather Jenkins, she said, "he served through the revolutionary war under General Francis Marion."

In girlhood she became a member of the Methodist church, and her life was in accord with her profession of faith.

The greater portion of her long and well used life was spent in Perry and through her most admirable character she was the friend of all who knew her.  For several years prior to her death she was confined to her home by the infirmities of age.  Yet she was not rebellious, but with great fortitude she bore the confinement with faith that was apparent in word and deed.

Surely her life on earth was and is a benediction to all christian people, a rich inheritance of faith and hope to her loved ones.

Surviving her are one sister, Mrs. Ann Judson Fordam: three daughters, Mrs. Mary G. Dasher of Macon, Mrs. Elizabeth A. Hemingway of of [sic] Georgetown, Miss., and Mrs. Sara Louise Hemingway of Perry, Ga.,; [sic] 22 grand children and six great-grand children.  One daughter and several grand-children were unable to reach Perry in time for the funeral.

Though there is sorrowing among the loved ones of this noble "mother in Iseral [sic]," their sorrow is full of hope and faith that there will be a joyful re-union in the "sweet by and by."

The bereaved ones have the sincere sympathy of their many friends.