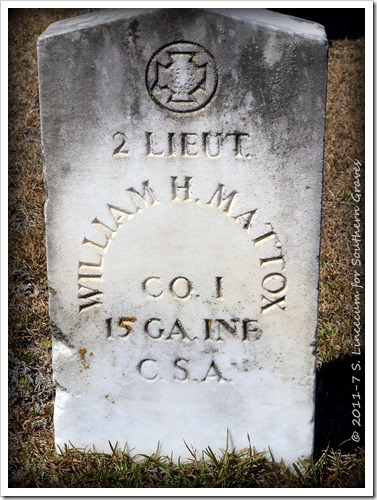 William Mattox, born 1836 in Elbert County, Georgia to Henry Page and Sophia N. Mattox, was a lot of things.  He was a son, a brother, a husband, and a father.  He was also a large landowner, a shrewd businessman, a soldier, and a statesman.

But was William Mattox the meanest man in Georgia? Those who labored for him might argue he was.

A great-great grandson of Col. Mattox, Mr. Ray Chandler, penned an article about his notable ancestor.  It was published in the Summer 2011 edition of Georgia Backroads magazine.  In detailing the life of Mattox, Mr. Chandler described the acquisition of land which began after his great-great grandfather's 1856 graduation from college.  By 1860, W. H. Mattox owned more than 1,000 acres in Elbert County, much of it along the Savannah River.  To go with that property was 79 slaves.

Mattox believed in bringing industry to the South, but had to wait until after the Civil War to put his plan into practice.  After a couple of years of service, Mattox returned to the business of amassing property and wealth.  According to Mr. Chandler -

By the mid 1880s, Mattox's land holdings totaled 3,414 acres, mostly rich bottomland along the Georgia side of the upper Savannah River, including two islands…

Mattox also had two mills at this time, yet he only employed 40 people to run all the farming and milling operations.  He got away with that by also leasing convicts from the state – a cheap source of labor akin to slavery.  Returning to Mr. Chandler's article,

By the 1880s, Mattox had a convict-labor stockade on his upper Savannah River property near Carter's Island.  He seemed to favor leasing black female convicts, presumably because they were less likely to attempt escape than males.  In time, he would acquire a reputation for cruelty in his treatment of these leased convicts.

Citing a gentleman that worked as a guard at Mattox's stockade, Mr. Chandler told of a convict that failed to show up for work due to illness.  When Mattox was done with her, "she was a bloody mess." It was also known among the guards that when a convict gave birth, the job was to take the newborn to the river and throw it in.

The awful reputation of William Mattox was known far and wide.  Part of a local folksong – referenced in Mr. Chandler's article, as well as the book titled Chained in Silence: Black Women and Convict Labor in the New South – described "Bill's" ability with a whip:

But karma was about to take a bite out of Col. Mattox.  Just a few months after he expanded into textiles with the Heardmont Cotton Mill, a fire caused by a lightning strike destroyed his new venture.  No insurance plus the panic of 1893 equaled bankruptcy by 1898.

One of the investors in that cotton mill was Col. Mattox's son-in-law, Jeptha Jones, Jr.  Bad blood between the two men might have contributed to the gunfight two years later that killed William H. Mattox, though witnesses said the battle between the two was over a horse.

He Was Shot By His Son-in-Law Yesterday at Heardmont.

Elberton, Ga., Nov. 17. – At Heardmont, twelve miles below Elberton, this afternoon Hon. W. F. Mattox was shot and killed by his son-in-law, J. B. Jones, Jr.  It is said that at the time they were shooting at each other.  Colonel Mattox was about 67 years of age, and has long been one of the most prominent men in the state.

The remains of William H. Mattox were laid to rest at Elmhurst Cemetery in Elberton.  William's parents, brother, wife, and daughter are there as well. 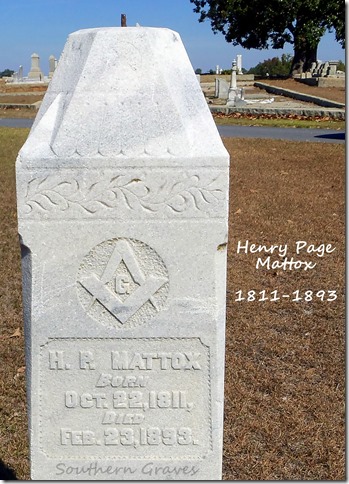 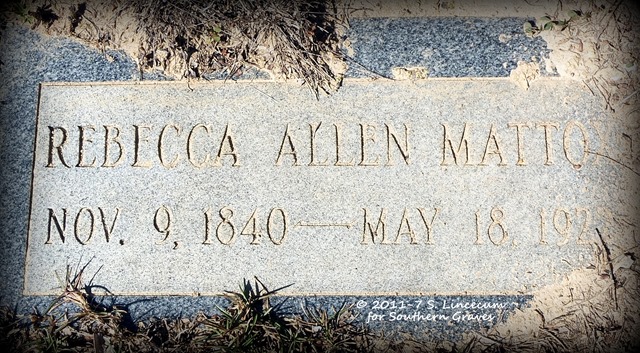 Rebecca Allen married William Mattox in 1858.  Rebecca was a grand-niece of Beverly Allen, who shot and killed U.S. Marshall Robert Forsyth in Augusta. 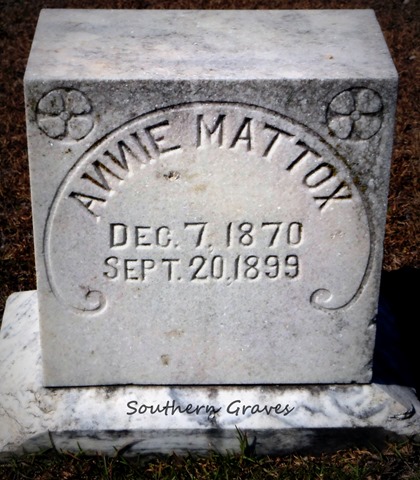 Heather M. Gardner said…
Wow. This is a lot of wonderful work. Thanks for sharing.

Kindred Roots said…
Fascinating story! I noticed the backwards N's on Annie Mattox's grave. That's not something you see everyday.
January 13, 2018 at 9:08 PM