A family burial lot that can't be missed (even if you tried) while wandering through Oak Hill Cemetery at Newnan, Georgia is that of the Parrott – Bigby family.  The sacred ground is adorned with grand columns, several-feet-tall tombstones, and life-size angels. 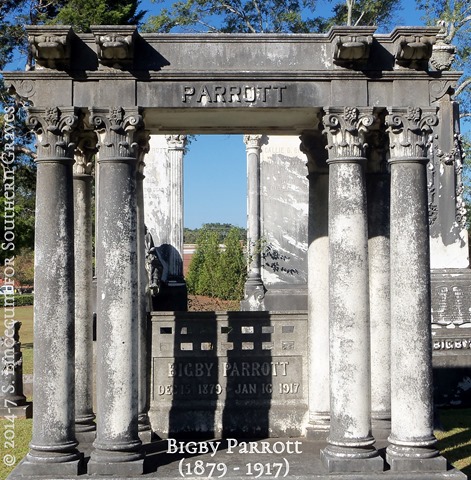 A Tribute.
Bigby Parrott – a friend, a beloved husband, a cherished brother, a generous character and a good business man – passed to silence and pathetic dust as the golden sun kissed the morning dew at 6:15 o'clock Tuesday morning, Jan. 16, at his home in Atlanta.  He had just passed the milestone that marks the middle station on Life's highway, being 37 years of age.  He had not been well for several weeks, and on Friday before he fell into that "dreamless sleep that knows no waking," his physician called over the 'phone and asked as to how he was.  Bigby replied, "I am better to-day; don't think you need to come." Until the last, in his home, what he added to the sum of human joy was characteristic.

A loved and loving husband, father and brother, was Bigby Parrott.  He leaves a wife, a little 2-year-old daughter, and one sister, Mrs. Mary Parrott Orr.  He was the son of Chas. C. and Callie D. Parrott.  He entered Peekskill College, New York, when he was 18 years of age.  Finishing there, he entered business at Greeley, Col., going later to Oklahoma, where he remained a year or so before returning to his native State.

Our heart goes out in deepest sympathy to his loved ones, and feel sure he would have us say:  "Not as I will, but as Thou wilt."  A Friend. 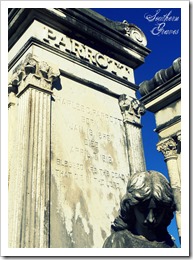 Preceding the death of Bigby by less than four years, was that of his father Charles.  His remains rest behind Bigby's at Oak Hill.  Following from the 10 April 1913 edition of the Carrollton Free Press (Georgia):

Mr. Charles C. Parrott, president of the First National Bank of Newnan, was run over by an Atlanta & West Point train near the city limits of Newnan at 6:45 o'clock Monday morning and instantly killed.

Mr. Parrott, who was on his way out to his farm, was evidently looking for another train, and so did not see the one which killed him until it was upon him.

He was one of the most prominent men in that section and is widely mourned.  A wife and two children survive him.

The image below shows that Charles's wife Callie D. (Bigby) has a tombstone nearly identical to that of her husband.  At the time of my visit to Oak Hill, her angel had fallen over.  It is my understanding that since then a massive repair and cleanup process was undertaken, and Callie's angel is back in its rightful place. 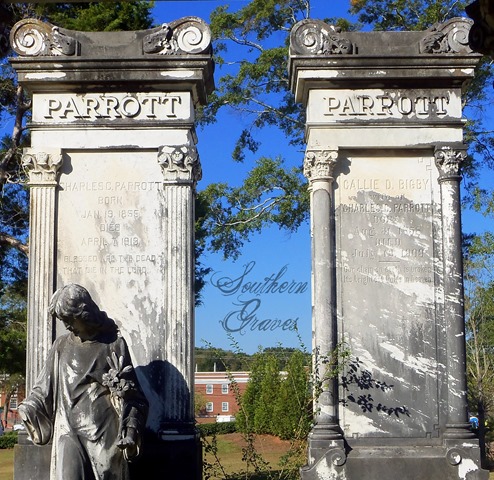 Our chain on earth is broken.
Its brightest link's in heaven.

Another flower, its love cup filled,
Folds all its sweetness in.
Another soul is home in Heaven,
Without a spot of sin.
Once more the crystal gates of light,
Have shut an angel in.

dsy1944 said…
I have many ancestors buried in that cemetery. My mother was a Summers and was born and raised in Newnan. Hambrick, Sorrells and Reynolds are other names of ancestors in my mother's family.
---Doug Yancey
March 7, 2017 at 6:15 PM

dsy1944 said…
Do you ever visit cemeteries in and around Atlanta? I have restored several cemeteries in DeKalb County, Forest Park and Atlanta. I am planning to work on two very old cemeteries in Virginia. I have photos of each of these but don't know how to post them.

S. Lincecum said…
I've been to Oakland a few times, and still haven't seen it all. Always with others, so I couldn't wander for hours like I would have done alone.

There are several groups on facebook where you can join and post photos. Thanks for your work. Always a treat for me to see stones and cemeteries restored. Never want to see the history lost.
March 8, 2017 at 12:09 PM