C is for Crossed Feathers & Jesse Wootten (A to Z, Tombstone Tuesday) 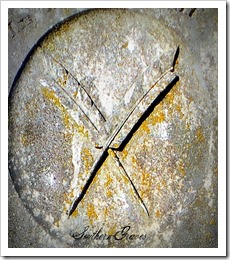 This pair of crossed feathers was carved to decorate the tombstone placed for Jesse Calaway Wootten in Newnan, Georgia's Oak Hill Cemetery.  Unless in the form of wings, feathers are not something I often see.  Douglas Keister writes in Stories in Stone:

Because of their lightness and their association with wings, feathers can be a symbol of the ascent to the heavens.  A feather can also represent the authority to administer justice because, even though the feather is very light, it is enough to tip the scales.

Ok.  But that just didn't seem to fit in this case.  So I kept digging to find out more about Jesse Calaway Wootten.

Jesse was born 6 October 1836, possibly in Wilkes County, Georgia.  He was married and occupied as a lawyer by 1860, residing with wife Frances "Fannie" J. (Dent) in Carrollton.

Pvt. Wootten enlisted in Company A of the 12th Battalion, Georgia Light Artillery in May of 1862 at Newnan.  In mid-January of the very next year, he was "discharged by reason substitute furnished." I don't know who paid for the substitute.  [For more information about substitute soldiers in the Civil War, go here.]

By the time the U.S. Federal census was taken for 1870, Jesse and Fannie had four children:  Eva, Harry, Dent, and Jesse.

It was only in reading death notices / tributes from local newspapers that I uncovered why, in my opinion, the pair of crossed feathers were carved on Jesse's tombstone.  Mr. Wootten was a writer and journalist, serving as editor of the Newnan Herald.  A couple of excerpts (published in the Herald 6 February 1874):

…Thus has passed away in the prime of his manhood and in the midst of his usefulness, a brother journalist, who was an honor to his profession and a useful and active member of society in the section in which in which [sic] he lived…  As a writer Major Wooten [sic] was conservative and dignified.  Dispensing with the useless flowers of rhetoric, when discussing important political measures, he was always clear, pointed and forcible in argument.  The Herald under his management enjoyed a fine reputation among the country weeklies of the State. – Carrollton Times.

…For many years Major Wootten has wielded an able pen as editor of the Herald, and has been a "power within himself," in battling for Georgia and Georgia's rights.  Indeed, a valuable member of the Georgia Press has fallen, and left vacant a place that will be hard to fill with such another man as was Major Wootten. – West Point News. 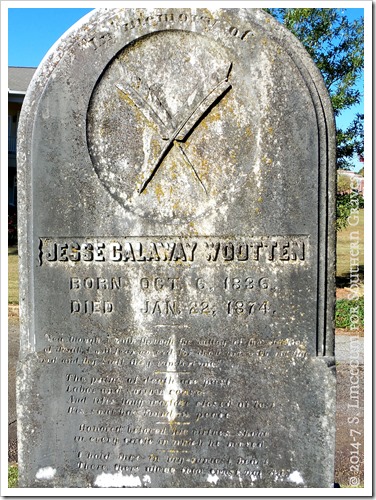 Interested in knowing more about Jesse Calaway Wootten? Other notices state cause of death as "a short illness of three days, after a violent attack of [Pneumonia]." Here is a full tribute published in the Newnan Herald (same edition as above).

Died on the 22nd ult. at his residence in Newnan, Jesse C. Wooteen, who was born in Wilkes County, Georgia, Oct. 6th 1836, aged thirty seven years, three months, and sixteen days.  Truly hath it been said, that in the midst of life, we are in death.  Only a few days before his death, Major Wootten was in his usual health, his spirits buoyant with a prospect of a long life of prosperity and usefulness.  But death came, like an untimely frost, and cut him down in the prime of life.  In his various walks of life, the deceased has always been noted for his genial disposition and kindness of heart; strictly conscientious in all dealings with his fellow men, his life was a model of purity and virtue.  With him, duty was a supreme law, to which he always yielded ready obedience.  As a citizen, he was public spirited; being ever ready to aid by counsel and otherwise in any enterprise that would tend to increase the public weal.  As an editor his pen was active in advocating such measures as he believed to be of local or general advantage.  Scrupulously avoiding all personalities and unjust criticisms, he endeavored to make his paper a model of high toned and dignified journalism.

But it was in the domestic circle that he shone most brightly.  There surrounded by an interesting family and all necessary comforts, his home seemed to him a terrestrial Paradise.  To stranger and friend alike, he always extended a generous hospitality.  He was a dutiful son, and affectionate husband and a devoted father.  But never did he allow his paternal affection, to blind him to the duties he owed to his children; for he early instilled in them both by counsel and example, the importance of fillial [sic] love and obedience.  Adopting a rule of life sanctioned by his judgement and conscience, he endeavored to live by it.  It is no wonder that such a man was not afraid to die.  "Death has long since lost its terrors for me" were among his dying utterances.  What to many is regarded as the king of terrors, was to him a messenger of peace.  Truly a good and useful man has gone; and as his loss is sorely felt by us all, we can only unite our sorrows with those of his distressed family…FRIEND. Lori said…
Very cool website. I have family members on both sides who do genealogy work and they are frequently flying around the country to poke around in cemeteries. This adds to the database for everyone doing research.

Sharon E. Cathcart said…
There are always such interesting things to see, and so much history to learn, when you visit cemeteries.

PJ said…
What an incredible obituary - he was obviously very well respected. My favourite line was the one about his home being a terrestrial paradise. Love the feathers and agree they must be to do with him being a writer. Really interesting post as always.

Janet said…
I thought about the feathers being quills when I saw the nibs at the bottom. Very interesting story of this man. Keep up the good work!

S. Lincecum said…
Thanks for all the nice comments, ladies!