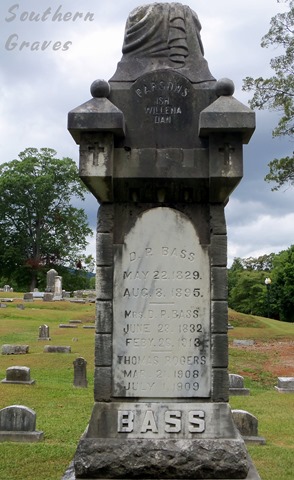 A tombstone shared yesterday – the one that stands to honor the memory of Anna Bass Harvey – also memorializes her parents, David P. and Sarah Bass.  An obituary each for David and Sarah follows.

One of Dalton's Best Men Gone to his Reward.

The sweet influence of no man in Dalton was more felt than that of Rev. D. P. Bass.  His death last Thursday was a sad blow to Dalton in every sense of the word.  It is superfluous to multiply words in commendation of him.  No class in Dalton or Whitfield county but will miss him and [to] know him was to love him.  He was suddenly stricken down and rapidly desolution [sic] took place in the body mortal but the spirit of the man and christian accompanied by the myriods [sic] of angels hastened to his home where the blessed "Peace, Peace, Peace" was found awaiting him that he so long sought and in his last breath cried out for.  We sincerely and honestly deplore his loss and tender our heartfelt sympathy to those he left behind.

Deceased Was Aged and Highly Respected Resident of Dalton.

Mrs. D. P. Bass, one of the city's most highly respected and beloved residents, died at the home of her daughter, Mrs. T. A. Berry, Wednesday morning at 9 o'clock, following a brief illness.  Mrs. Bass suffered an attack of la grippe last week, and this, in connection with her advanced age, caused her demise.

Mrs. Bass was 81 years of age, having come to this city to live about 35 years ago, moving here with her family from Summerville.  Her husband was for years prominently identified with the business activities of Dalton, being at one time manager of the Crown Cotton Mills.  He was also one of the city's leading merchants.

Mrs. Bass was, up to a few years ago when her health broke, one of this city's leading women, taking an active part in the work of the First Methodist church of which she was an earnest member for a long period.  She was an excellent Christian woman, combining within her those commendable traits of pure womanhood.  In her passing, the city has lost an esteemed resident.

The funeral services were conducted at the home Thursday afternoon at 3 o'clock, Rev. W. R. Foote, pastor of the First Methodist church, officiating, and interment was in West Hill cemetery.

Mrs. Bass is survived by the following daughters:  Mrs. T. A. Berry, of this city; Mrs. John Berry, of Atlanta, and Mrs. Henry Harvey, of Cartersville.

Anonymous said…
It's a shame you don't have a donate button! I'd most certainly donate
to this fantastic blog! I guess for now i'll settle for bookmarking and adding your RSS
feed to my Google account. I look forward to new updates and will talk
about this site with my Facebook group. Talk soon!
March 25, 2018 at 10:31 PM

Anonymous said…
You need to be a part of a contest for one of the highest quality blogs on the internet.

Anonymous said…
Good post! We are linking to this particularly great content
on our site. Keep up the great writing.
April 18, 2018 at 6:10 PM