The Death and Burial of Mrs. Anna Bass Harvey and Her Husband Henry 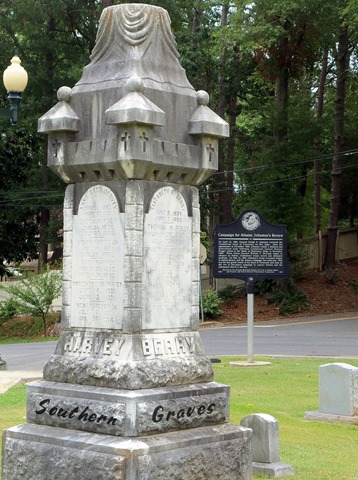 Anna Bass, wife of Henry Harvey, was born 1 April 1865.  Upon her death on 29 March 1895, just a few days before her 30th birthday, Mrs. Harvey was laid to rest at West Hill Cemetery in Dalton, Whitfield County, Georgia.  The following obituary is from a local newspaper.

The Death and Burial Of Mrs. Henry Harvey.

That Mrs. Henry Harvey of Rome should die so young is a cross her relatives would find hard to bear was it not for the promise of our Savior that those dying in him should have everlasting life and to-day she is numbered among the blest in that home not made with hands.  As Miss Anna Bass, she was one of Dalton's lovely flowers, and one who was loved by all who knew her.  Mr. Henry Harvey wooed and won her for his bride six years ago, and with them went the blessings of a world of friends, but the inscrutible wisdom of God and jealous love of the angels for one so fair and so pure, she was elected to adorn their holy band and from which not even the father[,] mother, sisters nor husband could wish her return.

She died in her adopted home in Rome last Friday morning and was brought here that evening.  Her remains were accompanied by relatives and a number of friends.  Her funeral took place Sunday morning from the Methodist church which services were conducted by Rev's. S. R. Belk of Rome, and B. F. Fraser, of this city.  The funeral sermon was a beautiful one, solemn, impressive and full of hope to the christian soul.  The interment took place at West Hill cemetery.  A large number of friends came up from Rome Sunday to attend the last sad rites.  Mrs. Harvey was the third daughter of Rev. and Mrs. D. P. Bass, and a sister of Mrs. T. A. and Mrs. J. M. Berry.

Words seem cold and impressionless when we undertake to offer any consolation to the bereaved ones and would be but senseless things had we not the knowledge that "it is not all of life to live nor all of death to die." Death loses its stings when one dies in full fellowship with Christ as did Mrs. Harvey.  She was a graduate of the Dalton Female College and her remains were followed to the grave by all of her classmates and fellow students.  She leaves two children, a little boy and girl aged two and three years who will remain in Dalton for the present.  We extend with the whole community our sincerest sympathy.

Memorialized on the tombstone pictured, along with Mrs. Anna Harvey, was her toddler.  He was Henry Harvey, Jr., born 18 January 1891, and died 29 December 1892.  His accidental death was also reported in the local newspaper.

Fatally Burned.
The CITIZEN chronicles with the deepest regret the melancholy and fatal accident which befell the little two year old son of Mr. and Mrs. Henry Harvey, of Rome, on the 27th.

Mrs. Harvey was visiting her father's family at this place, Rev. D. P. Bass, and on the evening of the 27th, while her little son was playing in a room where there was a bright fire, he ran too near the flames and his clothing was ignited.  Before the fire could be put out, the unfortunate child received injuries which proved fatal on the following day…

Dorothy Moore was another daughter of Henry Harvey's memorialized on the family marker.  This little one lived just five months.

The little one had been ill but a few days and died early Sunday morning and brought here Sunday night, to the home of Mr. and Mrs. T. A. Berry, its uncle and aunt.  Mrs. John M. Berry, another aunt, went down to Rome Saturday.  Those who came up from Rome were:  Mr. and Mrs. Sam Powers, Messrs. Burton Reese, John and Andrew Harvey.

The final name found on the panel enlarged at right is that of Henry Harvey, Sr., who outlived wife Anna Bass by almost twenty years.

FUNERAL WAS HELD AT CARTERSVILLE

Deceased Was Well Known and Had Many Friends Here – Successful In Many Business Ventures – Brief Sketch of Life.

Mr. Henry Harvey, a prominent resident of Cartersville, died at his home Friday morning, following a protracted illness; heart trouble was the cause of his decease.  Saturday, the body was brought here and interment was made in West Hill cemetery.

The deceased was 52 years of age, being born and reared in Rome.  He was a son of Judge Harvey, a distinguished jurist of Rome, and on reaching manhood, studied law and was admitted to the bar, practicing for a short time.

He then went into the mercantile business, and was a prosperous merchant when he took the presidency of the Rome Cotton factory.  He later went into the lumber business.  His last business venture was the purchasing of the Ladd Lime works, which he conducted profitably up to a short time before his illness when he disposed of his holdings.

Mr. Harvey would more rightly be classed as a successful promoter, for he put through many big business deals, building up different industries.

He was three times married, his first wife being Miss Lucy Penn, of Trion.  After the death of his first wife, he was married to Miss Anna Bass, of this city; his last wife was Miss Ludie Bass, a sister of his second wife.

Funeral services were conducted at Cartersville Saturday morning, the Rev. Mr. Hunnicutt officiating, after which the body was brought here for burial in West Hill cemetery, a brief service being conducted at the grave by the Rev. W. R. Foote.