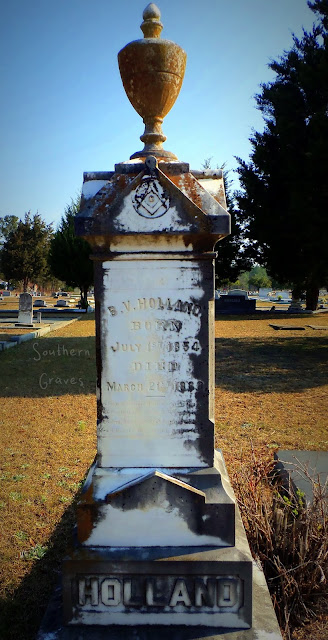 Benjamin Virginius Holland was in the wrong place at the wrong time in March of 1888. A cyclone touched down in Telfair County, Georgia, a place where he had previous business interests. He was no match for the "air demon," and at the young age of thirty-three, his life was taken. Following from the 22 March 1888 Savannah Morning News.

HALF CALHOUN IN RUINS

A Brakeman Killed While on the Way to Athens.

ALL AUSTELL IN ALARM

Darts From the Sky Kill Two in Dougherty.

CRUSHED BY A CHIMNEY.

Horrible Fate of a Man the Wind's Howl Didn't Wake.

ALL THE STATE VISITED.

The Wind Accompanied by a Heavy Downpour.

LUMBER CITY, GA., March 21. -- A disastrous cyclone visited this part of Telfair county at 4 o'clock this morning, crossing the line of the East Tennessee, Virginia and Georgia railroad at 9 1/4, known as Whiddon and Holland's turpentine distillery. This distillery is now owned by Rayals, Millaire & Co. The former owners, Mr. Whiddon of Eastman, and B. V. Holland, of Telfair county, had both met at the distillery to adjust old business matters. Both of these gentlemen were killed. The house in which they were stopping was situated far up on the west side of the railroad. The house was torn into splinters. The bodies were found some distance down the hill... 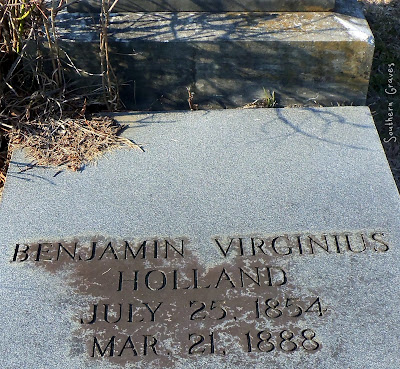 HOW THEY WERE KILLED.
EASTMAN, GA., March 21. -- Messrs. Whiddon and Holland rushed out of their houses to save themselves, but had run only a few steps when the house was blown over them and crushed them so that they seemed hardly to have an unbroken bone left in their bodies. They were killed instantly. All their clothing was swept away except a small fragment of Mr. Whiddon's undervest. A flat car standing on the railroad track was blown off and torn to pieces...

B. V. Holland was laid to rest in Cedar Hill Cemetery at Cochran, Bleckley County, Georgia. 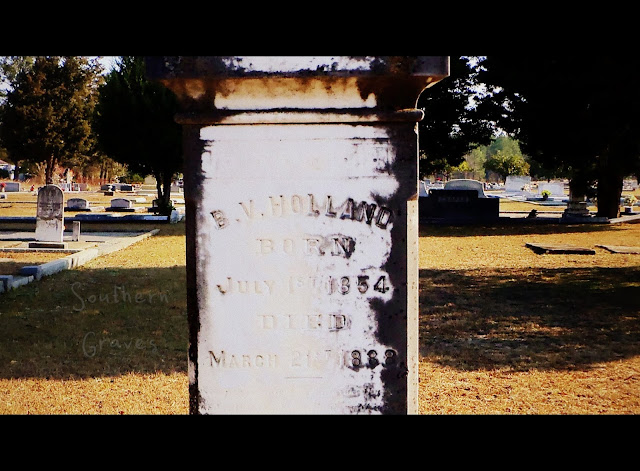