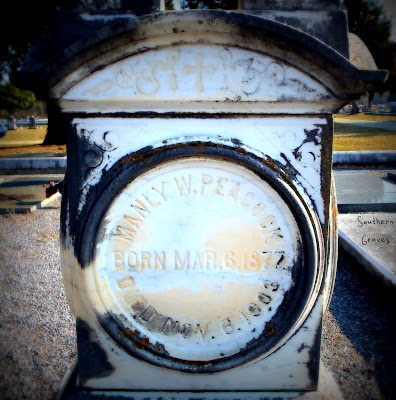 Manly W. Peacock, son of Albert, was born 6 March 1877. Two of his brothers were Jefferson D. Peacock, mentioned previously in this space, and Zebulon Vance Peacock, a former mayor of Cochran in Bleckley County, Georgia. Upon his death in 1903, Manly was buried in a family lot at Cedar Hill Cemetery in Cochran.


DUEL TO DEATH IN DODGE COUNTY

MANLY PEACOCK INSTANTLY KILLED BY H. G. EVERETT, AFTER THE LATTER WAS PERHAPS FATALLY SHOT -- TROUBLE GREW OUT OF A SUIT IN WHICH EVERETT CHARGED THAT PEACOCK HAD ALIENATED HIS WIFE'S AFFECTIONS -- SUIT WAS TO HAVE BEEN TRIED THIS WEEK -- ALL THE PARTIES AMONG THE MOST PROMINENT IN THAT SECTION OF THE STATE. 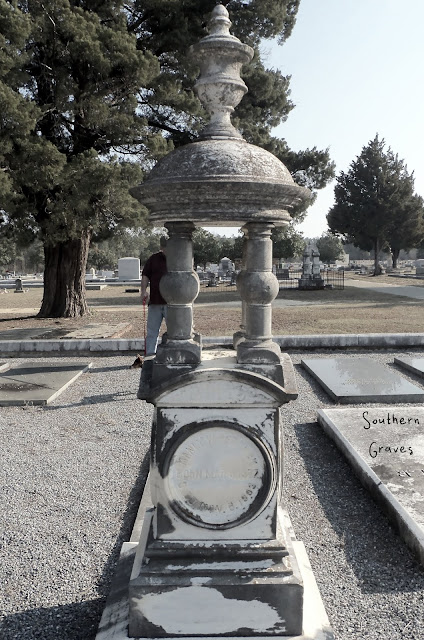 RHINE, Ga., Nov. 7. -- The killing of Manly Peacock was the culmination of domestic troubles of the slayer which have lasted for some time. The Telegraph told last spring of Mr. Everett's finding his wife and Peacock together at a hotel in Birmingham and the sensational arrest of the pair at the time.

Mr. Everett separated from his wife then and a tragedy between Peacock and Everett has been barely averted by friends since then. Everett entered a damage suit against Peacock in Dodge superior court for $10,000, based upon this and other charges of intimacy with his wife, and the case was in order for trial at Eastman next week.

EASTMAN, Ga., Nov. 7. -- Everett entered suit against Peacock in the last court for $20,000 damages for intimacy with his wife and alienating her affections. The suit was carried over and was to be tried here next week. Peacock went to Rhine, it is said to try to settle the case with Everett.

A witness says they were sitting on the steps of a store at Rhine in conversation when Everett told Peacock he had written letters to his wife of late and Peacock raised and said "you lie." Peacock drew his revolver quickly and fired, the ball entering Everett's abdomen. He will die.

While Everett was falling he fired, the ball entering Peacock's head just above the ear. Peacock died in an hour.

This trouble has been brewing a year or more and the outcome is not a surprise here.

Everett is well connected by marriage. His wife was Miss Laura Bowen of this county. Peacock was a handsome, wealthy young man and belonged to one of the best and wealthiest families in this section and his death is deplored by his many friends here.

He will be buried at Cochran, his home, tomorrow. Everett is hourly expected to die.

Everett was a woods rider for Peacock's brother, who ran a naval store business. Peacock was a book-keeper.

Last spring Peacock ran away with Everett's wife and went to Mobile and Everett followed them and had them arrested but released them and brought his wife back home. Peacock came back and has been around there almost ever since. He has several times insisted on seeing the woman, but has had difficulty in doing so on account of her folks and husband. Later he ran away again with her and went to Florida and returned again.

It was thought that Peacock would be killed if he came back to rhine but he defied the warning and came anyway. He said he had no fear of any man. He used a "Krag-Jorgensen" pistol, and it is said when he pulled the trigger nine balls went into Everett almost instantly and that it shot at the rate of 100 per minute.

COCHRAN, Ga., Nov. 7. -- Manly Peacock, who was killed at Rhine yesterday, was well known here, where he was reared, and where his family still reside.

He was the son of Mr. Albert Peacock, who was quite a prominent and wealthy citizen of this place. Manly Peacock was about 27 years old, and few young men who have ever lived here were more highly esteemed and gave brighter promise of a successful and useful life. He stood high in social and business circles, and was known as a quiet, moral and honorable young man.

After attending the N. G. M. & A. College at Dahlonega and the University at Athens, Mr. Peacock took a business course at Pougkeepsie [sic], N.Y., and entered the naval stores business at Rhine with his brother under the style of A. & M. W. Peacock, where he was still successfully engaged at the time of his most unfortunate tragedy.

The first news of the tragedy received here was a telegram to Mayor Z. V. Peacock announcing the shooting of his brother. Immediately he, in company with Dr. T. D. Walker, left for Rhine, and a telegram today told of the death.

The remains will reach here this afternoon and will probably be interred at the cemetery here tomorrow.

^^ Tale of Murder & Greed in the Piney Woods of South Georgia ^^

A couple of weeks later, the same paper published an update:


H. G. Everett Recovering.
EASTMAN, Ga., Nov. 20. -- H. G. Everett, who recently shot and killed Manly Peacock at Rhine, and who was himself seriously shot in the body by Peacock, is fast recovering from his wound, which was for a long time considered fatal.

I wonder what (if anything) became of the Everett marriage.

Unknown said…
Herbert Peacock is my great grandfather, which makes Manley my great uncle. There is an interesting story about a 1 carat diamond ring that was purchased for Miss Laura by Manley for one thousand dollars. Laura never knew about the ring. It ended up that Herbert gave it to Effie Studstill and she wore it her whole life. My mother has this beautiful ring now. I would love to know what ever happened to Laura and her son and Mr Everett.
May 20, 2021 at 3:52 PM