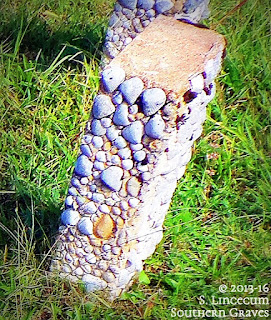 If you walk cemeteries in the southern United States often enough, you are bound to come across some seashells along with the expected gravestones. And I don't just mean cemeteries along the coast. You can find the pair in various combinations even hundreds of miles inland.

Whether there's a single conch shell on top of a traditional tombstone or hundreds of cockle shells attached to a fully mounded gravesite, you might see the practice as purely for decoration.

And you wouldn't be wrong.

But could there be more to it? Could those shells perhaps be more significant?

The answer is "yes," and here are a couple of prevailing thoughts on the matter.

The Watery World of the Dead
Elaine Nichols in 1989 was an archeologist, collector, and editor for a museum exhibit entitled, "The Last Miles of the Way: African-American Homegoing Traditions." According to her, for many enslaved Africans and their descendants in America, "The world of the dead was a watery world, an upside-down world under the living world." The bottom environment of a body of water -- ocean, river, lake -- was the realm of the dead.


African American graves can also demonstrate a keen sense of ethnic consciousness. Sometimes graves are decorated with shells or with broken household vessels that derive from African practices and from beliefs that the ancestors lived in a watery realm and that vessels or water symbols aided communication between the worlds of the living and the lives of the dead...

To enslaved Africans forced to live in America, seashells were a symbol of immortality and guidance. It was the sea that brought them, and it would be the sea that carried them home. So using shells, and anything else having to do with water, as a grave decoration makes perfect sense. 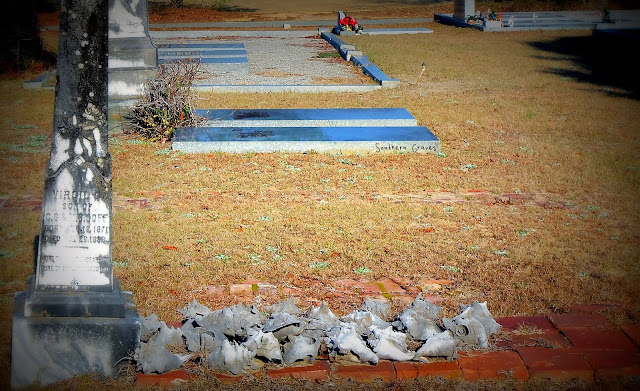 A Pilgrimage to the Other Side
The cockle or scallop shell is also seen as a symbol of baptism and a Christian pilgrimage to Heaven. According to the Association of Gravestone Studies:


Clam shells, scallop shells, and other types of shells are a symbol of a person's Christian pilgrimage or journey through life and of baptism in the church. In the middle ages, Christians wore the scallop shell to indicate that they had made a pilgrimage to the shrine of St. James of Compostella in Spain. Placing a shell on a gravestone when visiting the site is an ancient custom and may in fact have several different meanings depending on the cultural background of the people placing the shells. The idea of crossing over a body of water to the promised land or crossing the River of Styx to the afterlife, the final journey to the "other side" is also part of the symbolism of the shell. 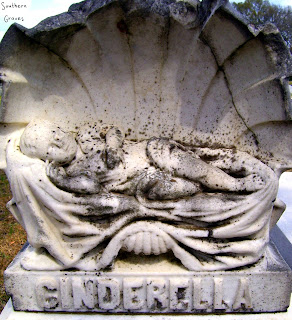 Bonus Theory!
An Alabama genealogist offers that seashells pressed into the earth mounded over a gravesite helped it from being easily washed away by the rain.

And one final note: A small loose shell seemingly tossed or randomly placed on a gravestone is akin to the Jewish custom of placing a rock to symbolize a visitor.

So, what do you think? Without knowing the intent of the person(s) who placed the shell(s) on a particular gravesite, I initially approach each instance as though any and all (or a combination of) theories could apply.