By S. Lincecum 05 July
James E. Oberry and Penney Faulk were married 1 March 1860 in Robeson County, North Carolina. If you follow me on Twitter, you might have seen me share yesterday an image of their daughter Rosa's tombstone in Cedar Hill Cemetery at Cochran, Bleckley County, Georgia. James and Pennie are there, too.

Pennie passed away first, at the young age of 38 years. A write-up in a middle Georgia newspaper shared the news:

As Reported by Our Special Correspondents.

...Cochran.
THREE DEATHS IN COCHRAN...
NOVEMBER 7. -- The dread despoiler death is dealing sad havoc among us this week...At 7 o'clock last night Mrs. James E. Oberry died. Mrs. Oberry ate a hearty supper, immediately after which she walked into her poultry yard to attend her fowls when she was suddenly attacked, and being removed to her bed chamber expired calmly in a few minutes. Heart clot was the probable cause of death...

MR. J. E. OBERRY.
COCHRAN, Ga., July 21. -- J. T. [sic] Oberry, one of the most prominent citizens of Cochran, died at his home here last night after a lingering illness of several weeks. He is the father of Messrs. Jesse and Gardi Oberry of Willacoochee and Mrs. T. D. Walker and Mrs. Dave Harvard of this place. He was senior member of the naval stores firm of J. E. Oberry & Co., and a partner of P. L. Peacock & Co. of this place. Mr. Oberry has been prominently identifified [sic] with the life of Cochran for a number of years and was an important factor in the growth and development of the town. He was a man of the strictest honor and integrity and universally respected by all classes. The funeral took place this afternoon and was conducted by the Cochran Masonic lodge, of which Mr. Oberry was a true member.

Here are the stones memorializing the aforementioned daughter Rosa L. and husband Francis A. Cochran. 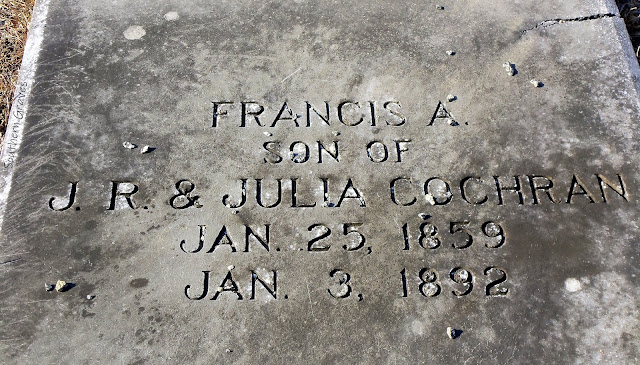 And finally, one with daughter, mother, and father together. 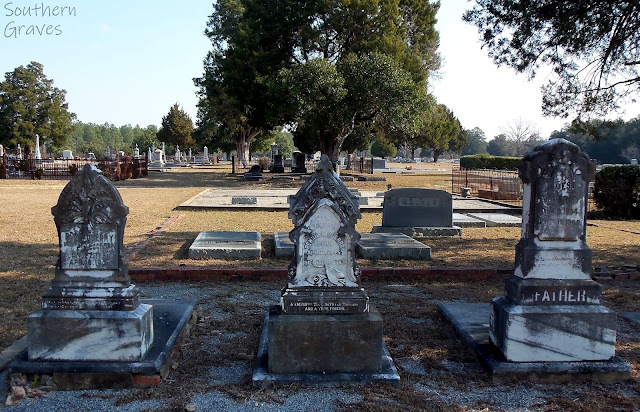