Obituary of William J. Thomas (d. 1865) and a Bit of Freemasonry Symbolism 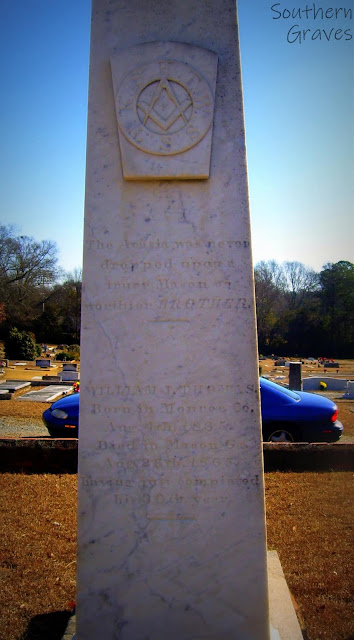 The first line of William's obituary was also inscribed on his gravestone.

He graduated at the Military Institute, Marietta, Ga.; was considered an excellent scholar, and always conducted himself with decorum and dignity. He was married Dec. 20th, 1860, to Miss Julia Wright. He was a very affectionate husband and kind father. It may truly be said that he idolized his wife and little son, and it was his constant endeavor to furnish every comfort and luxury which could render life desirable and happy. He was sick but a short time, being violently attacked at 3 o'clock, A.M., and died at 8, P.M.

Our deceased friend never made a public profession of religion, but some who knew him well entertain the hope that he had experienced a change of heart. A few years ago, his wife united with the Church of Christ, which deeply affected him, and, at that time, he resolved to lead a new life.

He was modest, unassuming and retiring in his disposition -- kind and obliging to his friends -- charitable to the poor and distressed -- liberal in his donations to the soldiers and their families. He was regarded by the community as a noble, high-minded, honorable gentleman, and was greatly beloved by his brethren of the Masonic fraternity. He possessed many excellent traits of character, and during his sickness expressed the greatest gratitude to his friends for their kindness, and even thanked the servants for their attention. The absence of his wife greatly distressed him, and he constantly called for her until she arrived.

Before he departed this life, he said to the attending physician that he was not afraid to die, and was resigned to the will of God. May God be a husband to the widow, and a father to the fatherless.

"Friend after friend departs;
Who has not lost a friend?
There is no union here of hearts
That finds not here an end.
Were this frail world our final rest,
Living or dying, none were blest.

There is a world above,
Where parting is unknown,
A long eternity of love,
Formed for the good alone,
And faith beholds the dying here,
Translated to that glorious sphere." - P. M. RYBURN. 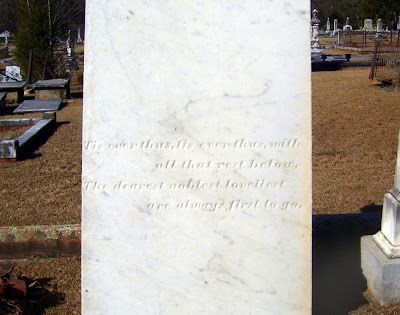 William's gravestone in Forsyth Cemetery at Monroe County, Georgia was further inscribed with the following:


The Acasia was never dropped upon a truer Mason or worthier BROTHER.

Tis ever thus, tis ever thus, with all that rest below,
The dearest noblest loveliest are always first to go.

Acasia might be a reference to the sprig of acacia that is a symbol of Freemasonry, representing immortality of the soul and innocence. According to Albert G. Mackey's Symbolism of Freemasonry (1882), "[I]n the impressive funeral service of our order, it is said, 'This evergreen is an emblem of our faith in the immortality of the soul. By this we are reminded that we have an immortal part within us, which shall survive the grave, and which shall never, never, never die.' And again, in the closing sentences of the monitorial lecture of the Third Degree, the same sentiment is repeated, and we are told that by 'the ever green and ever living sprig' the Mason is strengthened 'with confidence and composure to look forward to a blessed immortality.' ...It was an ancient custom, which is not, even now, altogether disused, for mourners to carry in their hands at funerals a sprig of some evergreen, generally the cedar or the cypress, and to deposit it in the grave of the deceased."