Mother and Son Puckett at Alta Vista Cemetery. And a Definition for Locomotor Ataxia.

By S. Lincecum 17 August
A small family plot in Alta Vista Cemetery at Gainesville, Hall County, Georgia holds the remains of a mother and son. Mary Francis Crawford Puckett (1828-1912) and son Lester Durant Puckett (1855-1908) hailed from South Carolina, but found their way to Gainesville about the 1870s. I suspect this was after the death of husband and father Puckett.

A set of books tops the Puckett family stone, which sits between smaller headstones for mother and son. A closed book often represents a completed life. This set of books, however, could be a nod to Lester's career path: he taught school and studied law. Obituaries for Mary and Lester follow. 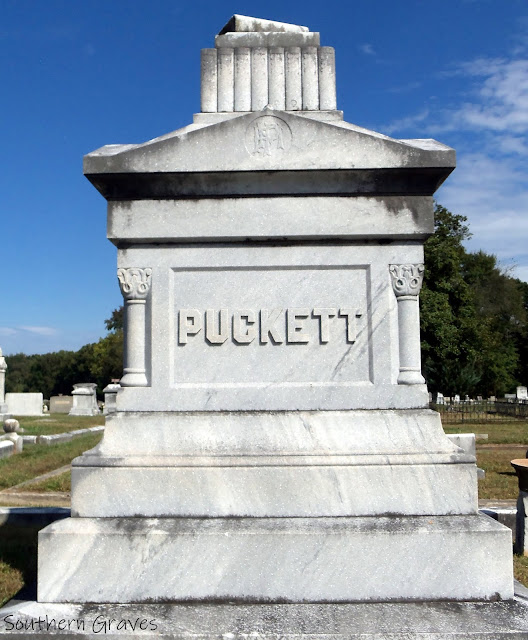 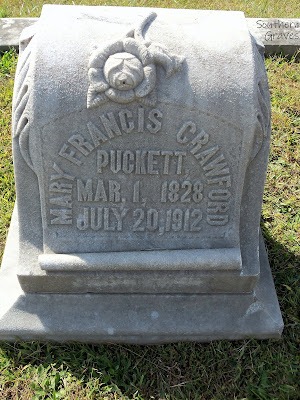 Mrs. Puckett Dead.
After an illness of more than a year, Mrs. Mary Francis Puckett died at her home at Sycamore street and Brenau avenue at 7:30 p.m. Saturday. She was eighty-three years of age and had been confined to her bed for a year or more on account of an accident resulting in a broken hip when she fell on the ice during the winter of 1911.

Mrs. Puckett was the mother of the late Col. Lester D. Puckett and had lived in Gainesville for forty years or more. She was a native of South Carolina. As she remained at home most of the time she was not well known to the people of the community.

The funeral services were held from the late residence at 4:30 o'clock Sunday afternoon, conducted by Rev. Frank Siler of the First Methodist church. The remains were interred by the side of her son at Alta Vista cemetery.

Lester's Malady Contributed to His Death 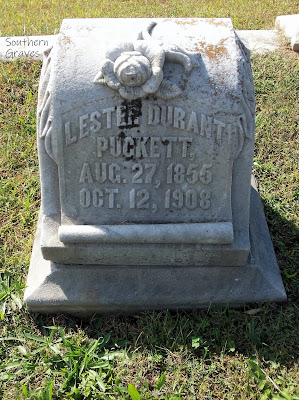 After an illness Extending Over a Period of Nearly Five Years He Passes Away.

Col. Lester D. Puckett died at his home at Sycamore street and Seminary avenue Monday evening about 6:30 o'clock. He had been confined to his bed with locomotor ataxia since January 3, 1903, and during that time he has suffered much.

Col. Puckett came to Gainesville many years ago from Walhalla, S.C., where he was born. He taught school in the county a number of years and then entered the practice of law. He had an unusually bright mind and his perception was keen. He always took an active interest in politics, though he never sought official honors for himself, save in a very few instances.

For many years Col. Puckett represented the Atlanta Constitution here as correspondent. He was also an enrolling clerk in the Georgia legislature for several terms, and when the bankruptcy law was passed he was appointed by Judge Newman as referee for this district.

Col. Puckett was fifty three years old and is survived by his mother. His death created no surprise as he had been very low for a long time.

The body was tenderly laid to rest in the family lot at Alta Vista cemetery.

I was unfamiliar with locomotor ataxia. Wikipedia defines it as "the inability to precisely control one's own bodily movements. People afflicted with this disease may walk in a jerky, non-fluid manner. They will not know where their arms and legs are without looking, but can, for instance, feel and locate a hot object placed against their feet." Mayo Clinic adds the following under the heading of Ataxia:


...A sign of an underlying condition, ataxia can affect various movements, creating difficulties with speech, eye movement and swallowing.

Persistent ataxia usually results from damage to the part of your brain that controls muscle coordination (cerebellum). Many conditions can cause ataxia, including alcohol abuse, certain medications, stroke, tumor, cerebral palsy, brain degeneration and multiple sclerosis. Inherited defective genes also can cause the condition.

It does seem Lester "suffered much."