Tribute to the Memory of Miss Georgia Whitehead (d. 1880) 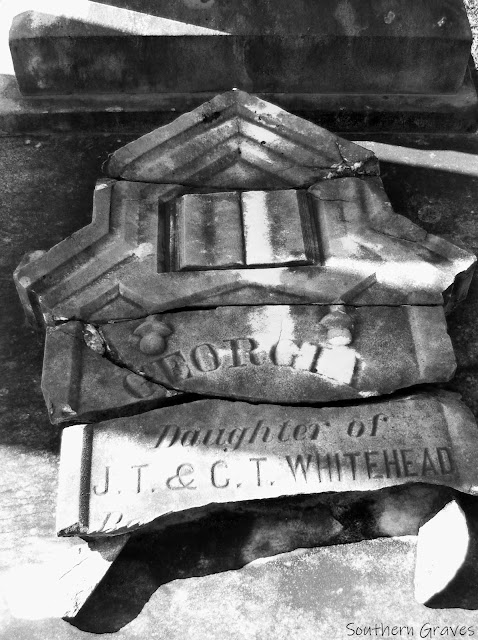 The broken gravestone for Georgia is at the Waverly Hall Cemetery. She was born 14 August 1849 to J. Thomas and Catharine McGehee Whitehead. Her death on 16 April 1880 was noted in the Harris County Census Mortality Schedule for that year. "Disease or Cause of Death" was listed as Neuralgia of head. From WebMD:

Symptoms include aching, burning, and throbbing pain that typically starts at the base of the head and goes to the scalp; pain behind the eye; sensitivity to light; and a tender scalp. The National Institute of Neurological Disorders and Stroke notes occipital neuralgia is not life-threatening, but the underlying cause might be. Such as tumors in the neck or diabetes. 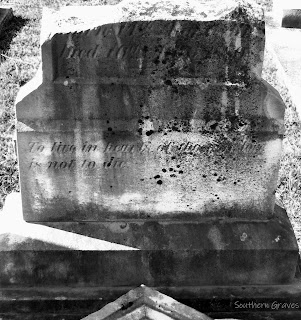 
Tribute to the Memory of Miss Georgia Whitehead.
"In the midst of life we are in death."
An all-wise Providence has again sent his messenger, Death, to call another loved one home -- one whose life was very dear to those around her. Long years have come and winged their flights away since the first sorrow; the wounded hearts are not yet healed, and they bleed afresh when another precious soul is called to "that bourne from whence no traveler e'er returneth." She is gone to join a father in a brighter and better world than this. 'Twas sad to see her snatched away when earth wore her most beautiful robe, and decked in her loveliest flowers. But she has gone to a land

The vacant chair will oft remind you of the cheerful, sunny face that once sat there; the flowers which she planted will still bloom on; but every change will whisper of the dear departed one.

'Tis useless to say that Miss Georgia was very much beloved. Those who knew her best loved her most. Although she had been in feeble health for years, and often prostrated by disease, yet she was always cheerful, even hopeful until a short time before her death, when she often spoke of dying with much composure. Withal she was a consistent Christian of the M E Church, and, while 'tis sad to know that she is gone, it should be a great consolation to her many friends that she was often heard to say, "I'm not afraid to die." May the bereaved mother and the grief-stricken brothers and sisters lean upon that strong arm, who is able and willing to support them in their time of trouble and distress. C.

To live in hearts of those we love is not to die.


Carved at the top of Catharine's stone are oak leaves and acorns. According to Stories in Stone, the acorns represent prosperity and fruitfulness. The leaves symbolize strength, endurance, eternity, honor, liberty, hospitality, faith, and virtue.