James T. Prescott, Jr. Died at His Post of Duty 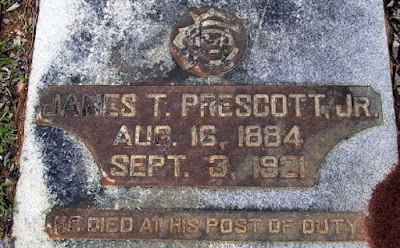 He Died At His Post Of Duty - Who wouldn't want to know more about that? Turns out he was a train conductor. Details of the accident were published in a local newspaper:


IN MEMORY OF JAMES T. PRESCOTT

On Saturday, morning Sept. 3rd James T. Prescott, conductor on the Southern Road, was instantly killed by an engine at Cordele.

It appears that, while making up his train preparatory to making his usual run, he was taking the number of the cars, and as he stepped backward to get out of the way of his train, he stepped directly in the path of a revercing [sic] locomotive.

Mr. Prescott was the only son of Mr. and Mrs. J. T. Prescott, deceased of Kathleen, Ga., and was reared in this county. Like his father, he was well known in Houston and was held in higest [sic] esteem by all who knew him.

He became connected with the G. S. & F. R. R. about fourteen years ago and had been conductor for twelve years.

His work was highly appreciated by officials of the road. This was shown by the feeling way in which the Superintendent spoke of him. He said, Mr. Prescott was "one of the very best men in my employ. A man who in his endeavor to give satisfaction, always attended strictly to business."

Mr. Prescott was 37 years of age and unmarried. Of the immediate family he is survived by three sisters; Mrs. J. T. Adkins and Americus, Miss Mary Prescott and Mrs. J. T. Langston of Kathleen. He also leaves two aunts, sisters of his farther, [sic] and other relatives to mourn his premature death. 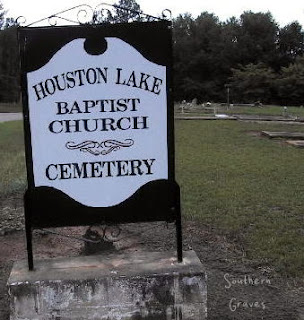 The remains were laid to rest in the family lot of the cemetery at the Factory Baptist Church.

Funeral Services were conducted in the presence of many friends and fellow-workers, by Rev. J. H. Roberson of near Perry.

The Pall bearers were Messrs B. B. Barker, O. V. Leggett, A. W. Gooden, J. O. Evans, J. A. Maddox and J. E. Johnson all of whom were conductors on the same road and seemed to feel deeply the death of their comrade.

The many friends of the sorrowing family extend their sincere sympathy to them in their bereavement. It should be comforting to them to remember that God makes no mistakes and his commands can but be obeyed. His work is finished and the All Wise Father has called him home to await the resurrection morn. - A Friend.

James's final vital record states the cause of death plainly: "Run over and mangled by train."

[Note: The Houston Lake area was once known as Houston Factory.]