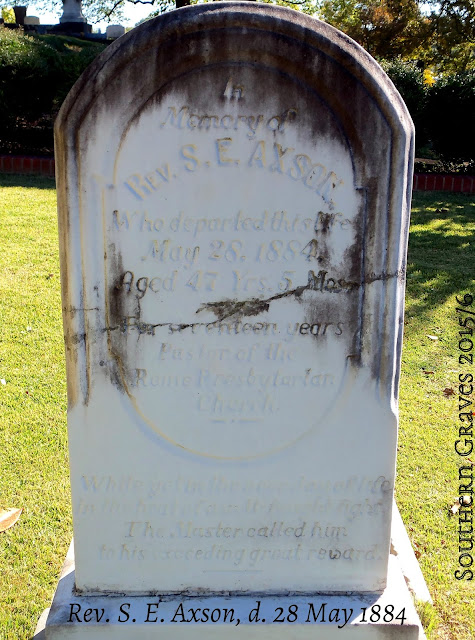 Rev. S. E. Axson, his wife Janie, and his children Ellen and Stockton, all rest at Myrtle Hill Cemetery in Rome, Floyd County, Georgia. Daughter Ellen was a wife of U.S. President Woodrow Wilson. She held the title of First Lady for seventeen months before her untimely death in 1914. Excerpts from a newspaper article covering her funeral are here.

An obituary for the good reverend follows:


Death of Samuel Edward Axson.
The funeral of Rev. Samuel Edward Axson, son of Rev. Dr. I. S. K. Axson, the venerable pastor of the Independent Presbyterian Church, of this city, took place at Rome on Friday. He was pastor of the Presbyterian Church in Rome from 1866 till last fall, when he resigned his charge and came to Savannah to visit his father. While here his mind became affected, and the efforts of skilled physicians failed to reach his case. His sad death is a heavy affliction upon his family. During the seventeen years he was pastor of the church in Rome he was universally respected, and was an able and zealous preacher and loving pastor. 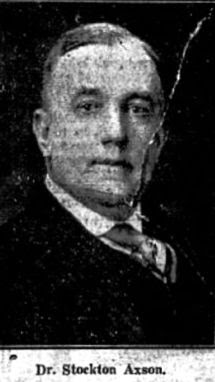 Son Stockton Axson was possibly named for his grandfather. In fact, Stockton's 1935 death certificate does provide a full name of Dr. Isaac Stockton Keith Axson. Young Stockton's death was reported in newspapers from across the south, from Texas to Georgia.


Professor Stockton Axson
The death in Houston, Texas, of Professor Stockton Axson, intimate friend and brother-in-law of the late President Woodrow Wilson, recalls the days when Mr. Wilson was in the White House and Professor Axson was a constant visitor. A brother of his first wife, Mr. Wilson was devoted to the man who taught at Princeton while the future president was head of the great university.

...President Wilson was very close to but few men and Professor Axson was one of them. He was with the president during his varying fortunes, at Paris in the post war conference and then in his last illness.

Dr. Axson was born in Rome, Ga., the son of a Presbyterian pastor and the grandson of two such ministers. He attended Davidson College in North Carolina, Wesleyan in Connecticut and Johns Hopkins. He taught for a time in the University of Vermont and at Adelphi College in Brooklyn. Then, in 1899, Dr. Axson followed Dr. Wilson to Princeton, where for fifteen years he held the title of professor of English. He went to Rice Institute as a Shakespearian authority in 1914 and remained until 1917 when he took the stump for Liberty Bond drives. Later that year the American Red Cross drafted him as secretary-general. This work he performed without pay until 1920 when he returned to Rice...