Brother John Hubbard was a Quiet and Unassuming Christian 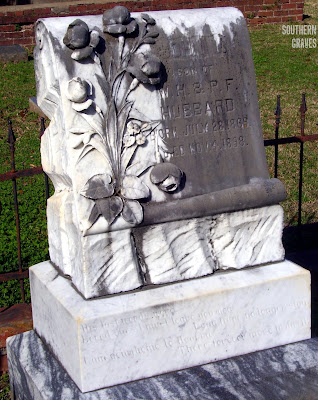 Brother Hubbard had been a member of the Methodist Episcopal Church for thirteen years. He was a quiet and unassuming christian, but, as in other relations of life, was true and unswerving. He was one of that few against whom I never heard a word. His death, like his life, was a quiet and peaceful one. Just a short while before he passed into his happy reward he called for his mother to come to the bedside and told her that he was going to leave her, but that he was happy because he was going to heaven. He then asked her to kiss him good-bye, after pressing the lips of his dear old mother three times, called for his sister, and addressing her in a similar manner, asked that she also kiss him good-bye, and after kissing her three times, he rested his head on the bosom of his blessed Lord while the Boatman dipped his oars in the chilly waters of the Jordan and rowed him safely home.

Few young men ever form a greater host of friends than did John Hubbard. His friends were numbered by his acquaintances, as evidenced by the large host who were present to hear the last tribute of respect paid to the memory of this obedient son, loving brother, and true citizen.

The writer feels that he has lost one of his best friends in the death of this noble young man, but turns for comfort to the hope that one day he may join him in the glad Hosannas which he now offers in the presence of his blessed King.

May God bless the grief-stricken family and all others who are left to mourn this great loss, and help us all to be faithful and meet beyond the sad farewell.

As in the midday sun the flower
Looks brightest, and then bends its head,
So fell thy son -- how short his hour
Of bliss -- how rapidly he fled.

Yet o'er his cradle, o'er his tomb,
An everlasting day-light shone;
A promise of bright days to come --
Why came he -- only to be gone?

As mounts the incense to the skies,
A towering cloud -- with cold, pale cheek,
Thou saw'st him to his Maker rise,
And his own blessed country seek.

He gave to thee his last, last sigh
Ere yet he heaved his latest breath;
He turned to thee his dying eye,
Ere it was mantled o'er by death.

Thou hadst' indulged the sweetest dream
Which hope e'er built, or time decay'd;
And in the future's distant beam,
Thy son a friend, a brother made.

The hours of youth's delightful reign
And rapture's ear;y spring-tide joy,
Thou in his smiles had'st shared again,
And in thy boy a hope detained.

That vision is departed -- sleep,
Soon leaves the weary mortal eye;
Go -- with his funeral cypress -- weep;
Thy spirit's peace is slumbering nigh.

With thine my mingling tears I'll bring --
Their bitterness he cannot know;
The morning rose I'll o'er him fling --
He was a rose of morning too. J. H. BAILEY.

Per his tombstone, John's last words were -