Capt. George Rogers was a Very Popular Man Among His Race 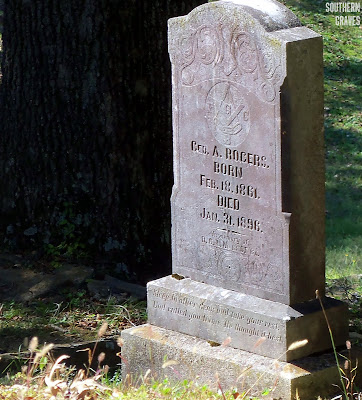 George A. Rogers (1861-1896) was buried in Myrtle Hill Cemetery at Rome, Floyd County, Georgia. He was a member of the Grand United Order of Odd Fellows, not to be confused with the Independent Order of Odd Fellows. More on the organization after the obituary -


Funeral of Capt. Geo A. Rogers.
Capt. George A. Rogers, Grand Master of District Grand Lodge No. 18 of Georgia, G U O of O F, died on Friday of last week and his funeral was held at Rome, Ga., on Sunday last. It was one of the largest ever witnessed in that city.

Mr. Rogers leaves a wife, a mother and sister to mourn his loss and who have the sympathy of his great host of friends all over the state.

Capt. Rogers was a very popular man among his race; he was loved by all. He was captain of the Hill City Guards; Past Master of Kenesaw Lodge, A. F. and A. M., a member of the House Hold of Ruth, the Good Samaritans and the Sons and Daughters of Jacob, all of whom attended his funeral in a body. There were also representatives from all parts of the state. He was respected by his white friends, quite a number of whom called to the house in a body to pay their respects before the remains were carried to the church.

The ceremonies were conducted by the Rev. Mr. Poindexter of the Baptist church, assisted by all the ministers of the different churches. The remains were laid to rest in the Myrtle Hill cemetery where honors by all the different societies were performed. Mr. M. C. Parker acted as marshal.

He was a leader of his people, a devoted husband, a true friend.

Our link is broken,
His crown is gain;
The universal Grand Lodge
Our jewel claims... 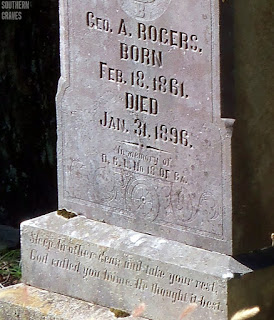 Sleep, brother dear, and take your rest;
God called you home. He thought it best. 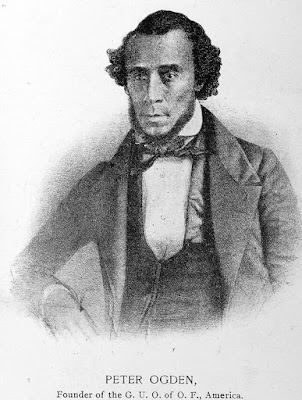 History of GUOOF vs. IOOF

In 1842 members of the Philomathean Institute in New York city petitioned the Manchester Unity aligned American Oddfellows for a dispensation to form their institute into a lodge of Oddfellows. They were denied, because they were Black. At this point Peter Ogden, a Black sailor who had been initiated into a Grand United Order affiliated lodge in Liverpool, suggested that they try to receive recognition from them. This idea was approved and Ogden sailed to England and obtained recognition from the Grand United Order's governing body at Leeds to form the Philomathean Institute into Philomathean Lodge #644 on March 1, 1843. The four existing Grand United Order affiliated lodges refused to recognize Ogden as Deputy, admittedly because they did not wish to [be] associated with Black people. It is unknown if they ever joined the IOOF or disbanded, but they did not become a part of the Grand United Order of Odd Fellows in America.

...Membership has always been open to people of any race, though it has remained a predominantly African American Order...Their female auxiliary known as the Household of Ruth flourished during the golden era of fraternalism with nearly 100,000+ members. Unlike the Independent Order, the members of the Household of Ruth maintain their independence from the GUOOF, although the men can attain the Ruth Degree.

The Savannah Tribune is a weekly African-American newspaper. It was founded in 1875 by Louis B. Toomer, Sr., Louis M. Pleasant, and Savannah native John H. Deveaux who served as the first editor. The newspaper published until 1878, when the all-white printers in the city, refused to produce it. It reopened in 1886. [Wikipedia]