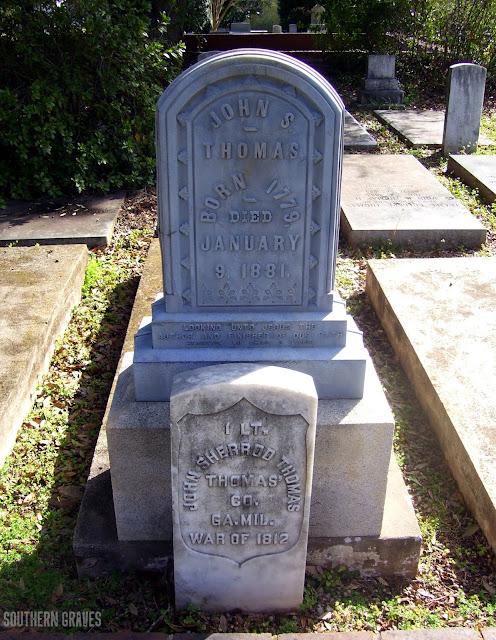 John S. Thomas died 9 January 1881 and was buried at Memory Hill Cemetery in Milledgeville, Baldwin County, Georgia. A death notice was published in the Augusta Chronicle, citing the Milledgeville Recorder, just a few days after his demise:

Judge John S. Thomas died at his residence, at Midway, Sunday night. He has for years been confined to his house. He was the oldest living male resident of the county at the time of his death. In his early life he was associated with many prominent positions under the State government. We are informed that Judge Thomas was born in May, 1779, and was nearly 102 years of age. He was, in his active life, a prominent citizen and a good one. Doubtless a more extended notice will be given of so remarkable a man.

That last line proved prescient. A "more extended" obituary was published in the Milledgeville Union & Recorder on 18 January 1881.


John Sherrod Thomas.
Col. J. S. Thomas was born in 1779, on Rocky Creek, Hancock county, Ga., and died at Midway, Ga., January 9th, 1881. -- He was the son of Martha Walker and James Thomas, who were married in Virginia -- removed to Columbia county, Ga., and thence to Hancock county. His mother, Martha, was born in 1747, in Goochland county, Va. No date is known as to his father's birth. Martha Thomas died in Midway in 1856, at the age of 109 years. -- James, her husband, died in Hancock, at the age of 97; both are buried at the old family graveyard about 8 miles east of Milledgeville. Of the early life of Judge Thomas but little is known. He had such education as could be obtained from the common schools of the country, at a time when he and all the family were frequently called together to fly to the nearest block house for protection from the Indians, his mother packing them on the horses, while his father, together with the men in the community, gathered and gave battle to the foe in defence [sic] of their homes.

In 1806, he was commissioned by the Governor, Captain of a Volunteer company, raised mostly on the eastern side of the river, and was several times ordered out to repel local invasions of the adjacent Indians, and held that command until 1812. In 1813, he went into what is known as the war of 1812, as Lieutenant of Artillery, in a company commanded by Captain Jett Thomas, who resigned after one year's service, leaving J. S. Thomas in command as Captain. The artillery company and the "Baldwin Blues," were ordered to rendezvous at Long Shoals, Aug. 13, 1813, by the government.

After the war, he made a contract with the government to supply subsistence stores to the army, then serving in the Creek Nation. He served in that capacity several years to the full satisfaction of Wm. H. Crawford, then Secretary of War. He was offered, by Gen. Glasscock, and later by Gen. Gaines, the position of Assistant Adjutant General, but declined on the ground that he had been offered and accepted the position of Pay Master for the volunteer troops, who had not been paid off, and as he had to go to Washington to settle his own account, he could attend to that business better than any one else, owing to the great confidence felt toward him by Wm. H. Crawford, Secretary of War. He succeeded in both missions, promptly. His own record says, Mr. Crawford gave an order to the Auditor, saying, "I know this man, settle his accounts without red tape, and see that he has the money to pay off the volunteers."

Going into civil life, he lost heavily by a too generous nature and too implicit confidence in the honesty of others. He settled a large estate on the sugar lands of Louisiana, but losing a brother there of yellow fever, he gave u that country and concluded to locate himself in Dooly county, Ga.

In 1844, he was appointed Director, by the Governor of the Central Bank of Ga., and he and the late A. M. Nisbet, cashier, had the arduous task of winding up the affairs of that institution. He gave his whole time and attention to this business, and it nearly cost him his life, by causing the most severe illness he had ever experienced.

In 1866 he became a member of the Protestant Episcopal church.

His losses by overweening confidence in his fellow man in early life, and later by the results of the war, he bore with a stoicism rarely seen, and which to a certain extent he must have learned from the Indians, who he used to say were always his friends, and who used to escort him when he had large sums of money to carry through the country.

In 1862, he made a contract with the government for supplying brandy and whisky [sic]. He soon found his distiller trying to defraud the government and discharged him at once. Speculators tried to buy from him and were notified they would be kicked off the premises immediately. He had an intense hatred for any man who would speculate on the fortunes of the government, and the Confederate States inspectors took his statements without any vouchers or inspections. A speculator he would kick into the road, but any Confederate soldier, however humble, always found a hearty welcome and always left him with a well-filled haversack and a canteen of peach and honey; and the annual fleece of a flock of 400 sheep was given freely to the wives, sisters and daughters of the sons of the Confederacy, to be woven into cloth and socks to assist their tattered rags in keeping out the cold. But a few months before the close of the war, when the result was inevitable, he sold $40,000 worth of cotton and invested in Confederate bonds -- such was his confidence.

The funeral of the late Judge John S. Thomas took place on Tuesday from the Episcopal Church in this city. The impressive services were conducted by Rev. J. M. Stoney, the pastor. The remains were followed to the cemetery by a large number of citizens, notwithstanding the extreme inclemency of the day.

John S. Thomas married Mary B. Neyle 24 June 1830 in Chatham County, Georgia. The couple had at least four children. A daughter, Eliza Neyle Thomas Wright, died of Consumption at age 35 in 1870. She also was buried in Memory Hill Cemetery. 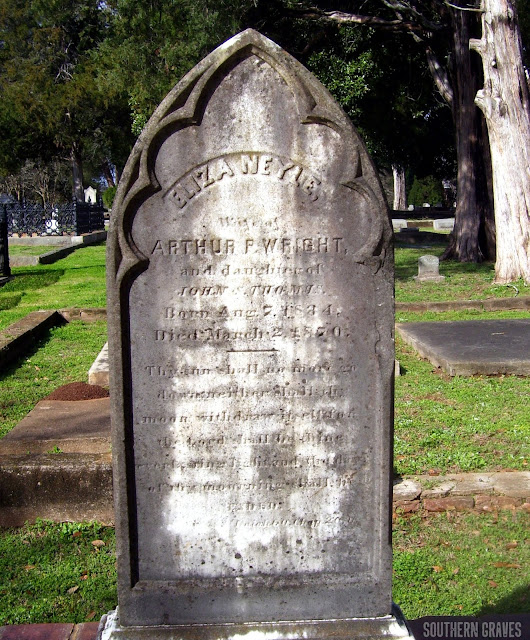 Thy sun shall no more go down;
neither shall thy moon withdraw itself,
for the Lord shall be thine everlasting light
and the days of thy mourning shall be ended.
- Isaiah, 60 Chap. 20 Vs.