...Mrs. Annie Tyler, daughter of Mr. Wm. R. Ennis, and wife of Capt. W. R. Tyler of the western part of this county, was very sick for some days during the past week and on Saturday last was reported to be extremely ill. Capt. Tyler who is mail agent on the Macon & Brunswick Railroad has been sent for to come home immediately...

I hope he was able to make it in time. Annie died the next day. 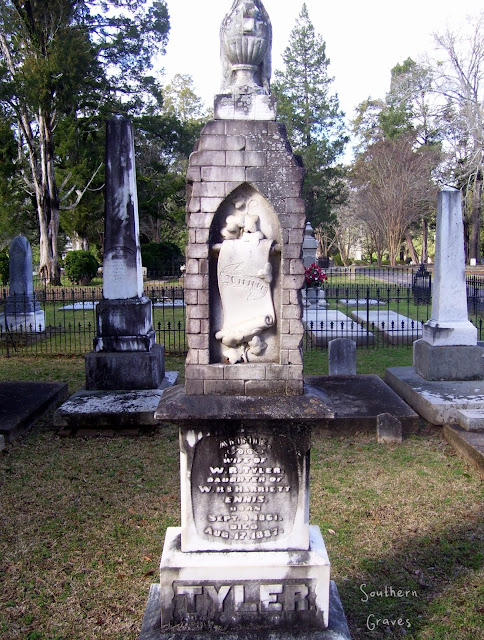 'Death loves a shining mark' is an old and trite saying and it was well illustrated in the death of Mrs. Annie Tyler of this county, which occurred on Wednesday morning last. She had been sick for several weeks and had suffered greatly. Death would doubtless have been a happy release to her from her sufferings, but for the separation from those she so loved and had to leave behind. But in this case, the ties that bound her to this life were peculiarly strong and involved the taking away from an aged couple their only child, who had absorbed all the love of hearts capable of strong affections; from a young husband who had just entered upon a full appreciation of the happiness of conjugal life of a beloved wife and a loving mother from a bright and promising little son, whose future career she must have looked forward to with happy anticipations. Who can appreciate the distress and anguish on the one hand of her who saw the approach of death and realized all its consequences, not to herself alone but to all her loved ones and the terrible distress on the other hand of those who saw her, upon whom their strongest and best love was fixed, about to be taken from their sight and companionship for the remainder of their earthly lives. Every event of this kind has its own peculiar circumstances and surroundings and every stricken heart has its own burdens, that none can comprehend but themselves.

Mrs. Tyler was the daughter and only child of Mr. and Mrs. Wm. R. Ennis of the Western part of this county. She was highly endowed by nature with personal charms and possessed a happy and lovable disposition.

In her girlhood she attended the Lucy Cobb Institute in Athens and graduated there. Several years since she was married to Capt. W. R. Tyler, formerly of Barnesville, Ga., and was living a happy married life up to the time that death severed all her earthly ties. She left only one child, a sprightly boy of four or five years of age, who will doubtless be a great comfort to both his father and grandparents.

On Thursday last, the remains of the deceased were brought to this city, accompanied by a number of the neighbors of the family, and after the usual funeral services, conducted at the Methodist church by Rev. Mr. Chapman, the final burial rites were completed at the cemetery. We cannot close without tendering our sincere sympathies to those who have been so sorely afflicted.

In Memoriam of Mrs. Annie Tyler.

On hearing of the death of this amiable young woman, memory carried me back to scenes of childhood, when she was first introduced into the school of which I was already a member; her gentleness won our hearts, and she became a favorite with all; and when still later, she entered college, and was for a time my roommate, my loving respect for her was increased. Truly it might have been said of her as of wisdom: 'Her ways are ways of pleasantness, and all her paths are peace.'

I knew her afterwards in her home, which seemed to me to be the resort of all the young people of the neighborhood. I have not been with her for several years, but I doubt not I could truthfully say she will long be mourned by friends and neighbors for miles around.

Thou art gone from us, gentle Annie, and it is our lot to weep with thy sorrowing husband and parents. May thy gain be also their gain, by leading them to strive more earnestly to meet thee in the home above, and may the dear little boy thou hast left be trained to emulate his mother's virtues and continue his mother's usefulness. A FRIEND.

Resolutions of the Salem Baptist Church Relative to the Death of Mrs. Annie Tyler.

The Committee appointed by the Conference of the Salem Baptist Church to draft resolutions relative to the death of Sister Annie Tyler, beg leave to submit the following:

On Wednesday morning, the 17th day of August, 1887, after a protracted illness, Sister Annie Tyler, only child of Mr. and Mrs. W. R. Ennis, died at the residence of her parents in this country. Sister Tyler was born in Baldwin county, Ga., Sept. 9th, 1861, joined the Baptist church in Milledgeville in 1880, and was married to Capt. W. R. Tyler in June, 1881. In September following she moved her membership from Milledgeville to Salem Baptist church in this county. Sister Tyler was a dutiful daughter, an affectionate wife, and a fond and loving mother, leaving a son five years old...

According to cemetery records, Annie's parents were later buried in the same lot like her in Memory Hill.