Stetson and Sanford Families in Lot 22 at Memory Hill Cemetery, Part I

By S. Lincecum 03 December
On the image below, I have labeled gravestones for eleven members of the Stetson and Sanford families. This family plot (no. 22) is located in section D of the east side of Memory Hill Cemetery in Milledgeville, Baldwin County, Georgia. 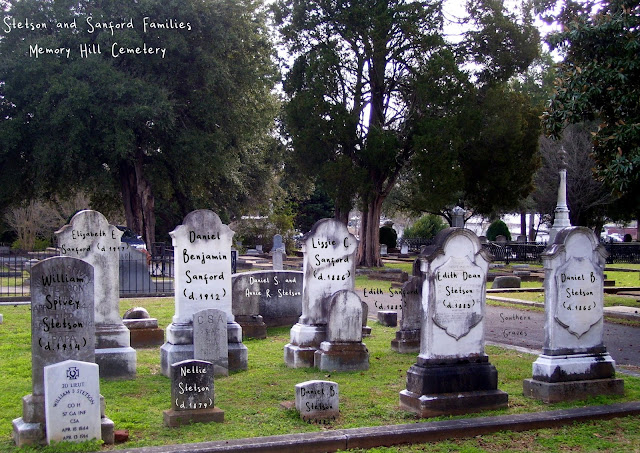 The elder parents of the group are Daniel B. and Edith Dean Stetson. According to his gravestone, Daniel "departed this life Feb 24th, 1865; aged 54 years, 10 mo's & 6 days." And per his death notice, Daniel was "an old and highly esteemed merchant and also a leading and influential member of the Baptist church." 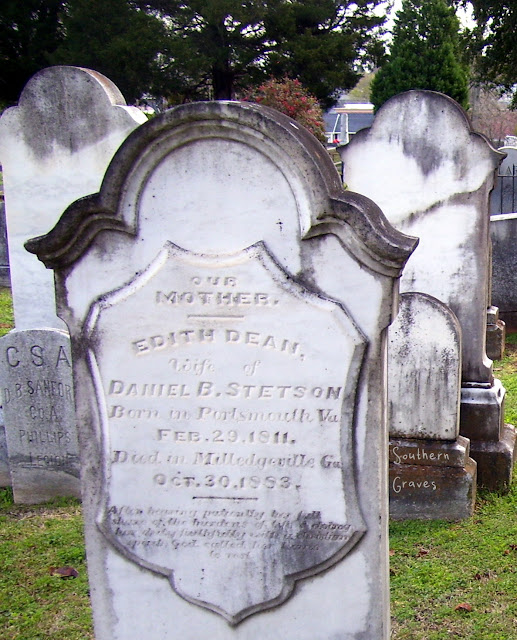 Edith was born in Portsmouth, Virginia on 29 February 1811; and died in Milledgeville on 30 October 1883. A portion of her epitaph reads, "After bearing patiently her full share of the burdens of life & doing her duty faithfully with a christian spirit, God called her home to rest." An obituary from the 6 November 1883 Union and Recorder (Milledgeville, GA):


DIED. -- Mrs. Edith Stetson, widow of the late Mr. D. B. Stetson, died at her residence in this city on Tuesday last. She had been in ill health a long time. Her funeral took place from the family residence on Wednesday, Rev. A. J. Beck officiating. She had been a consistent member of the Baptist Church for many years. She leaves three children, Mrs. D. B. Sanford of this city, Mr. W. S. Stetson of Savannah and Mr. Jas. P. Stetson of Hawkinsville.

Two of the three children mentioned would later be buried in the same lot at Memory Hill as Daniel and Edith. 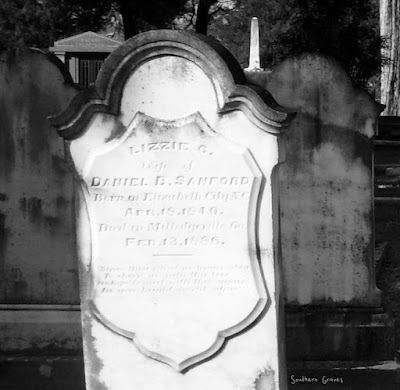 Elizabeth C. "Lizzie" Stetson was born in Elizabeth City, North Carolina on 18 April 1840. She married Daniel Benjamin Sanford 8 January 1868 in Baldwin County, Georgia, and the couple had at least three children. Lizzie died in Milledgeville on February 13, 1886. An obituary from the 16 February 1886 Union and Recorder:

It becomes our painful duty to announce the death of Mrs. Elizabeth Sanford, the wife of the Hon. Daniel B. Sanford, Ordinary of this county. The deceased has been suffering from bad health for some time past but was supposed to be improving until a short time before her death, which occurred on Saturday morning last. She was the only daughter of the late Daniel B. Stetson, who was for a number of years a prominent merchant of this city. She left a son and daughter and two brothers, Wm. S. Stetson, of Savannah, and James D. Stetson, of Hawkinsville, besides her bereaved husband, to mourn their irreparable loss. Mrs. Sanford was a lady of decided convictions and she fearlessly acted upon them, being especially and deeply interested in the temperance movement which is a subject of so much interest as present. In her, that cause has lost an earnest and fearless advocate. She has been for years past a faithful member of the Baptist church.

On Monday morning, Rev. Mr. Beck, conducted the funeral services at her home, her brothers having in the mean time arrived; after which her remains, accompanied by a number of our citizens, were conveyed to the cemetary [sic] and consigned to their last resting place in the burial lot of the family.

Miss Elizabeth Sanford, one of the most widely and favorably known women of Milledgeville, died at the home of her brother, Mr. D. S. Sanford, in this city Saturday night, after an illness of several months.

The passing away of Miss Elizabeth Sanford takes from Milledgeville one whose actions have been noted as being exceedingly kindly. Most of her life was spent in the interest of church work and doing what good she could to those in needy circumstances. She was the only daughter of the lately deceased Judge and Mrs. D. B. Sanford.

The funeral services were held from the residence at ten o'clock Monday morning, the services being conducted by Rev. J. C. Wilkinson, pastor of the Baptist church. The interment took place in the city cemetery.

In the passing away of Miss Sanford, the members of her family and other close relatives have the heartfelt sympathy of many friends in Milledgeville and throughout Georgia.

Stay tuned to the blog for Stetston and Sanford Families parts II and III, which will include biographical sketches and obituaries for Lizzie's husband Daniel Benjamin Sanford (1839-1912), as well as their son Daniel Stetson Sanford (1868-1924).