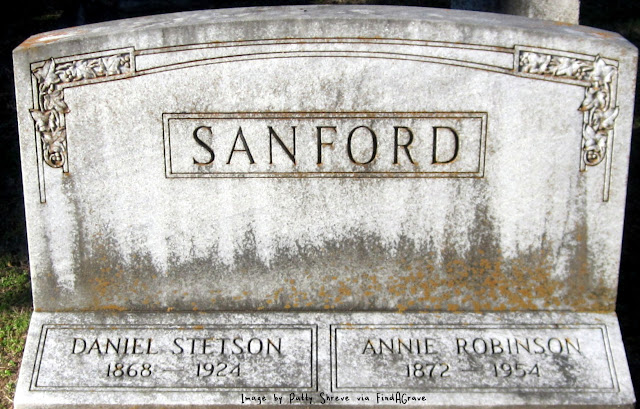 A gloom was thrown over the city early Monday morning, October 6th, by the announcement that Judge D. S. Sanford, had died at the Wesley Memorial Hospital in Atlanta, where he had gone about two weeks ago for treatment.

Judge Sanford had been in failing health for the past several months, and great concern was felt about his condition by his family and friends. During the summer months, he spent several weeks at Mountain City, and later went to St. Simon's Island, but his health was not benefitted, and after his return from the sea_coast he was confined to his home and room until about two weeks ago, when he went to the Wesley Memorial Hospital. While it was realized that his condition was critical, death came unexpectedly.

The remains were brought to Milledgeville Monday night over the Central railroad and were met by a large number of friends, and carried to the residence. The funeral services were held at the home Tuesday afternoon at three o'clock. During the hour, by a proclamation of Mayor J. H. Ennis, all business was suspended, and the people of the city joined in paying tribute to one who was recognized as one of the city's best known and highly esteemed citizens. The services were conducted by Rev. H. D. Warnock, pastor of the Baptist church and the remains were buried on the family square in the city cemetery, the following acting as pall-bearers: Messrs. J. C. Cooper, W. W. Stembridge, S. L. Terry, E. E. Bell, A. J. Carr, D. W. Brown, D. M. Rogers, Dr. L. W. Lee, the deacons of the Baptist church, officers of the cadet battalion of G. M. C., members of Milledgeville Bar Association, members of Camp Doles, U. C. V., and members of Knights of Pythias, acting as honorary escort. The floral offerings were large in number, and beautiful in design.

Daniel Stetson Sanford was born in Milledgeville, October 28th, 1868, his parents being Judge Daniel B. Sanford and Mrs. Elizabeth Stetson Sanford. He attended the Georgia Military College, and later took a law course at the State University. During the last administration of President Cleveland, he was connected in the clerical department of the Government Land Office in Oklahoma. Returning to this city, he entered the office of his father, and began the practice of law.

On February 9th, 1898, he married Miss Annie L. Robinson, whom he met while in Oklahoma. She with two children, Mr. Daniel B. Sanford, of the Technological School, and Miss Marah Sanford survive him.

Judge Sanford was one of Milledgeville's and Baldwin county's most prominent citizens, and was held in honor and esteem. He served his city as its attorney and legal advisor, and his county as Judge and Solicitor of the County Court, and at the time of his death was filling the unexpired term of the late, Mr. J. [?]. Lawrence, as Tax Collector. At the primary held in the spring, he was nominated for this office, and would have been elected in November for a term of four years.

He was a member of the Baptist church, and has served as chairman of the Finance Commitee [sic] and Treasurer for the past several years. He gave these offices close and faithful attention, and rendered his church most valuable service in its financial management. He willingly sacrificed his time and effort to these duties.

Judge Sanford was a live and progressive citizen, and was always deeply interested in the affairs of the city and county, standing for their advancement and upbuilding. He was a man of strong conviction, and yet courteous and considerate in his manner towards those who differed with him. He honored and revered the old soldiers of the Confederacy, and showed them every kindness and consideration when the opportunity presented itself.

He will be missed in the church, social, political, legal and business life of the city and county.