By S. Lincecum 22 January
James Abbington Everett and second wife Mary Beaufort Greene were, upon their deaths, buried in Oaklawn Cemetery at Fort Valley, Georgia. Though the county the cemetery is in is now called Peach, it was called Houston at the time of death for James (1848) and Mary (1852). 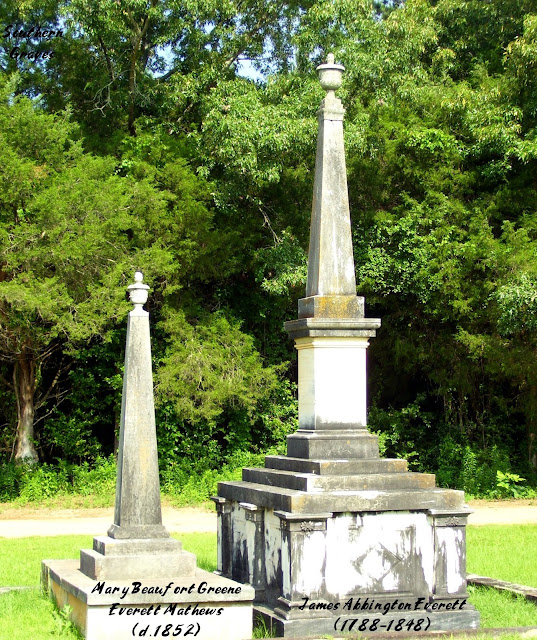 According to a biographical sketch submitted by Eddie Clark in The Heritage of Houston County, GA: 1821-2001, "No history of either Houston County or Peach County[,] Georgia could be complete without remembering James Abbington Everett...Historical accounts hold that [he] was both Houston County's first white settler and the Father of Fort Valley." The sketch continues as follows:


Mr. Everett's earlier life was spent in the pursuit of worldly wealth. He was known as an intelligent person who could spot opportunities and capitalize on them. At an early age of just 22 years, James Everett left his NC home and ventured into the North Georgia wilderness as an Indian trader.

...In 1818, James became a soldier of fortune and benefited by buying cheap land that other frontiersmen liberated from the native Indians. He also married Cuseena Barnard, the daughter of the most popular Indian trader in all of Central Georgia, Timothy Barnard...

In 1820, Timothy Barnard died and James Everett became the Executor of his father-in-law's estate. Mr. Barnard had owned 60 slaves and it was stated in his will that these slaves would be provided their freedom upon his death. However, Mr. Everett utilized a legal 'loophole' to gain control of Mr. Barnard's 60 slaves. It was at this point in time, the early 1820s, that Mr. Everett had both enough land and labor to start building his very profitable plantations.


A public benefactor, he gave land for church and school use here, secured for Fort Valley the Southwestern RR, and devoted his wealth to Christian Education in Georgia.

Some of that purported legacy is reflected on his gravestone in Oaklawn. 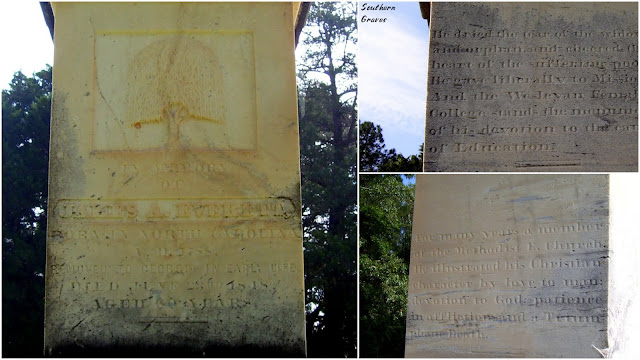 He dried the tear of the widow
and orphan, and cheered the
heart of the suffering poor;
He gave liberally to Missions.
And the Wesleyan Female College
stands the monument of his
devotion to the cause of Education.

In all relations of life,
he sustained a high position
and died mourned by a large circle
of relatives and friends.

For many years a member
of the Methodist E. Church,
He illustrated his Christian
character by love to man;
devotion to God; patience
in affliction; and a Triumphant
Death. 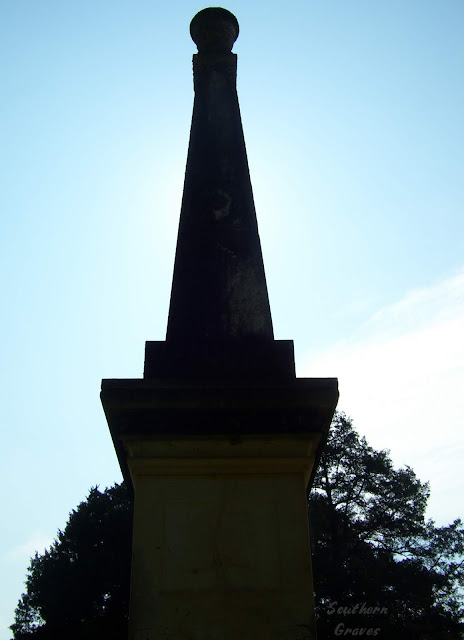