Bradford Houser was Murdered in 1914. Was His Case Ever Solved?

By S. Lincecum 09 June
If it was, I haven't recovered the final verdict. Which makes me wonder, did someone get away with murder?
Bradford Houser, born 31 May 1893, was a son of Emmett Houser (1868-1932) and Mary Mathews (1869-1929). For the 1910 US Federal census, the family was in Fort Valley, Houston County, Georgia. [Note: Fort Valley became part of Peach County when the latter was formed in 1924.]
Following is a series of news articles I did find regarding the killing of Bradford Houser in the fall of 1914.

Emmet Houser's Son Found Murdered, Fort Valley
Macon, Ga., Nov. 6. -- Bradford Houser, 23 years old, son of Emmett Houser, well-known newspaper man and manager for Hon. Thomas M. Felder in the last senatorial campaign, was found murdered at Fort Valley late tonight.
Young Houser had been attending a carnival that was in progress at Fort Valley, thirty miles from here. He was not missed by the merry-makers, however, and it was mere accident that Marshall Murray stumbled upon his body 150 yards from the carnival court.
No one had heard a pistol shot. Houser was unarmed.
Bloodhounds were obtained from Crawford County at once and an effort is to be made to clear up what the police are satisfied is a case of murder. 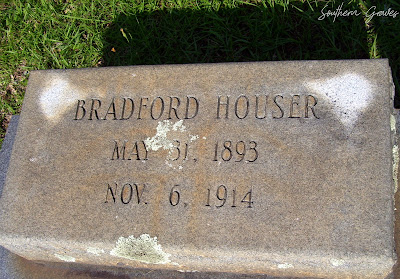 An article from the Houston Home Journal (Perry, GA) adds the following under the headline, "MR. BRADFORD HOUSER KILLED."

...The bullet had entered the heart and death was almost instantious. [sic]
The inquest Saturday did not disclose any positive evidence of the murderer, though suspicion was directed to a negro man who was drunk and threatening.
...The motive for the shooting has not been established, unless it was for robbery. The authorities are satisfied that Starke, who is considered a desperate negro is the one who fired the shot.
...The burial was in the cemetery at Fort Valley Sunday morning.

This next one is no shocker. 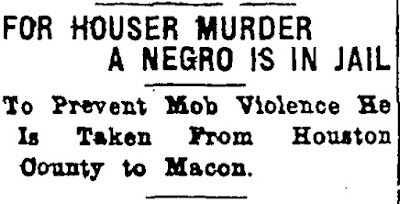 FOR HOUSER MURDER A NEGRO IS IN JAIL
To Prevent Mob Violence He Is Taken From Houston County to Macon.
Macon, Ga., Nov. 7. -- To prevent a possible lynching in Houston County, a negro, Claude Starks, who is alleged to have shot and killed Bradford Houser, at Fort Valley last night, was tonight placed in the county jail in this city...Tonight county officials [at Fort Valley] heard of a new plot to lynch the negro and they immediately put the negro in an automobile and brought him here.
Houser belonged to one of the most prominent families in Houston County...He was a nephew of Judge H. A. Mathews, of the Macon circuit.

This one was published the following month. So the first arrest might have been a rush to judgment. (I have yet to find another mention of Mr. Claude Starks/Stokes/Starke.)
Houston Home Journal (Perry, GA)
17 December 1914 - pg. 6 [via Georgia Historic Newspapers]

SIDEWALK GLEANINGS
LOCAL NEWS OF TOWN AND COUNTY
...In the city court last Tuesday morning Mr. Roy Anthine of Fort Valley was placed on commitment trial on the charge of killing Mr. Bradford Houser at Fort Valley about six weeks ago. The trial was not concluded when the HOME JOURNAL went to press at noon Wednesday.

Two months to the day after the murder, there's this. So the second arrest proved to be fruitless, as well?
Augusta Chronicle (Georgia)
Thursday, 7 January 1915 - pg. 3

GOVERNOR OFFERS REWARD.
Special to The Chronicle.
Atlanta, Ga., Jan. 6. -- A regard [sic] of $250 for the arrest of the unknown party who last November assassinated Bradford Houser, of Fort Valley, was offered Wednesday by Governor Blease...

Well, not so fast. According to an article published in the Houston Home Journal three months later, "the case of the state vs Roy Anthoine charged with murder of Bradford Houser was called..." And the following day brought this from the Vienna News (Georgia):

ANTHOINE ACQUITTED FOR MURDER OF HOUSER
Fort Valley, Ga., April 19. -- Roy Anthoine, charged with the murder of Bradford Houser on the outskirts of a carnival here several weeks ago was set free by the grand jury in Perry Thursday. The tragedy occurred sometime about 10 o'clock at night and the only eyewitness was a negro woman who told several conflicting stories accusing different parties of the murder and finally implicated Anthoine.
The case has attracted considerable attention on account of the prominent connections of Mr. Houser who is a nephew of Judge Henry Mathews and grandson of Captain J. W. Mathews...

The end. I guess. I did notice Roy Edgar Anthoine "registered in accordance with the Selection Conscription Law on June 5th" of 1917. Nothing else connecting him to the killing of Bradford Houser, though.
Buried alongside Bradford in Oaklawn Cemetery are his parents. 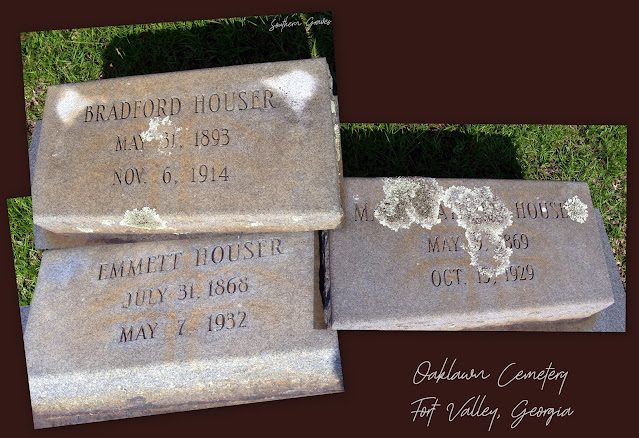 "The Father of Peach County" was a title given to Bradford's father, Emmett Houser. I was very surprised to discover the elder Houser tried to commit suicide in 1929. The newspaper article which proclaimed this intimated ill health was the reason the prominent lawyer shot himself. "The bullet entered the body close to the heart and came out through the left shoulder." Nine months after this incident, Emmett's wife died.
Emmett Houser lived another two and a half years after losing Mary.
Houston Home Journal (Perry, GA)
12 May 1932 - pg. 1

EMMETT HOUSER DIES AT FORT VALLEY HOME
Emmett Houser, 63, of Fort Valley, died at his home there at 6:30 o'clock Saturday morning. He had been unconscious since late Friday afternoon. Cancer of the throat caused his death.
Mr. Houser represented Houston county in the legislature and and [sic] served as Ordinary of the county before the county was divided.
After the establishment of Peach county, Mr. Houser was elected clerk of superior court, serving a four-year term. He was defeated in the 1928 primary, when he offered for re-election. At that time his health had begun to fail, and his condition gradually became worse.
...Interment was in Oaklawn cemetery.
Mr. Houser was a son of the late Jeff Houser...He was born in July, 1868, in Fort Valley, and had lived there all his life. Survivors include three sons, Claude Houser, of Atlanta and Fort Valley, secretary to Chief Justice R. B. Russell; Roderick Houser, Fort Valley; Lieut. Harold Houser, U.S.N. Panama Canal Zone; four daughters, Mrs. Walter Steinbaer, Washington, D.C.; Mrs. Helen Houser Woodall, Fort Valley; Misses Clifford and Janie Houser, Fort Valley; a brother, R. M. Houser.