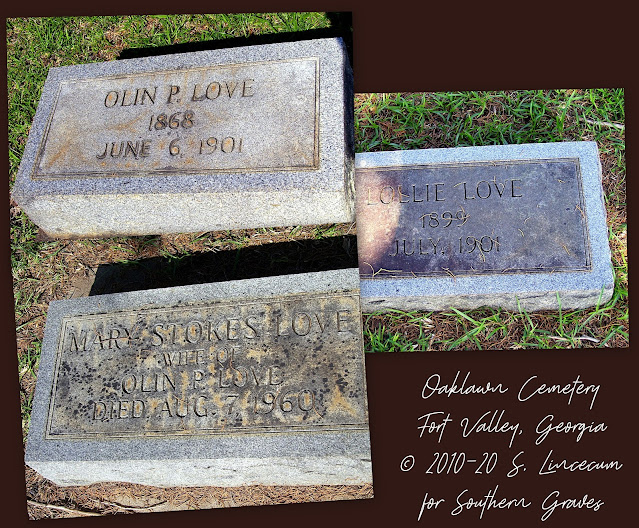 LITTLE LOLLIE LOVE DEAD.
Will Be Laid to Rest To-Day at Fort Valley Beside Her Father.
Mrs. O. P. Love had the misfortune to lose her youngest daughter, Lollie, shortly after midnight yesterday morning. The little one was just 22 months old and had suffered greatly for several weeks with typho-malaria. She was a bright and promising child and had already won many friends. Mrs. Love left last night for Fort Valley with the body, where it will be laid to rest to-day beside that of the husband and father, Olin P. Love, whose death just six weeks ago is still remembered. Mrs. Love and her family have the sympathy of many friends in their affliction.

FORMER SAVANNAHIAN DEAD.
Mr. Olin P. Love Died in Miami After a Short Illness.
Mr. Olin P. Love died yesterday morning at 7 o'clock in Miami. This announcement will bring sorrow to many persons in Savannah, where Mr. Love was known and highly esteemed. Formerly Mr. Love was a telegraph operator here, connected with the Western Union. At the beginning of the Spanish-American War he accepted a position in the government service at Key West, but lately held the position of general agent of the Atlantic, Valdosta and Western Railroad, with headquarters at Jacksonville.
Mr. Love leaves a wife, formerly Miss Stokes, the daughter of Mrs. Emma Stokes of Savannah, and seven children. Mr. Arthur Neeson, a brother-in-law of Mr. Love, was with him at the time of his death, having been summoned to Miami several days ago on account of his serious illness.
The funeral will take place to-morrow at Fort Valley, Mr. Love's former home.

Another article published prior to his death noted Mr. Love was suffering from a kidney infection.
(As an Amazon Associate I earn from qualifying purchases.)