In Her Will, Anna Hollinshead Provided Grave Markers for Her Mother and Two Siblings 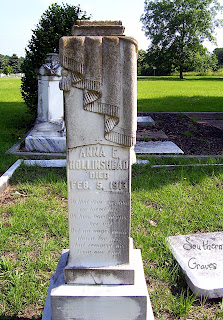 Sometimes, when I visit a gravesite, it's obvious a tombstone or grave marker was added years after a deceased individual's death. Maybe this was not an uncommon practice.

Anna E. Hollinshead died 5 February 1913 and was laid to rest in Oaklawn Cemetery at Fort Valley, Houston (later Peach) County, Georgia. On 20 November 1911, she signed her last will and testament. In it, she instructed her executor to erect monuments over the graves of her two siblings and mother "should I not, during my lifetime."

Should I not, during my lifetime, erect over the graves of W. E. Brown and his wife, Mrs. Emma Brown, a monument, then I hereby instruct my executor to have erected over their graves a suitable monument at a cost not to exceed One Hundred & Fifty Dollars, which sum I authorize him to employ for that purpose.

Emma Hollinshead Brown died 12 October 1906, and Walter Edward Brown died 1 March 1899. This was, respectively, five and twelve years before the signed last will and testament of Anna.

I also authorize and instruct my said executor to have erected over the grave of my mother, Mrs. Nancy Jane Hollinshead... 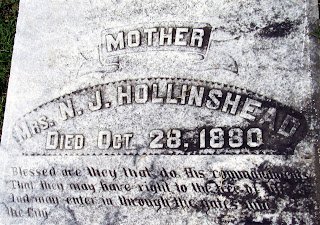 ...and over the grave of my deceased brother, John W. Hollinshead, monuments, the two not to exceed One Hundred Dollars in cost, which sum I authorize him to have used for that purpose.

I also authorize him to place a coping around the lot on which these graves are situated and a suitable mark over my grave at a cost which I leave to his discretion. 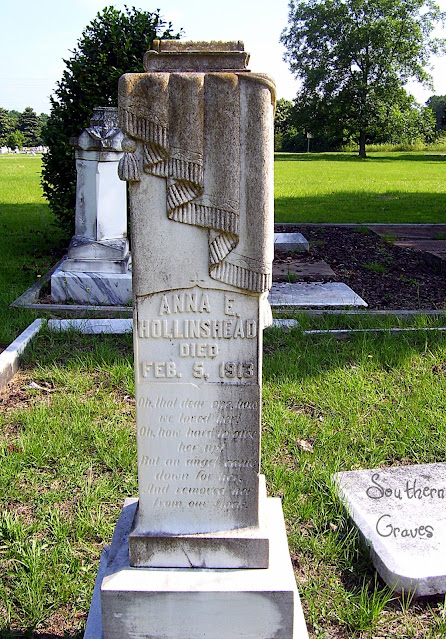 Oh, that dear one, how we loved her!
Oh, how hard to give her up.
But an angel came down for her,
And removed her from our flock.