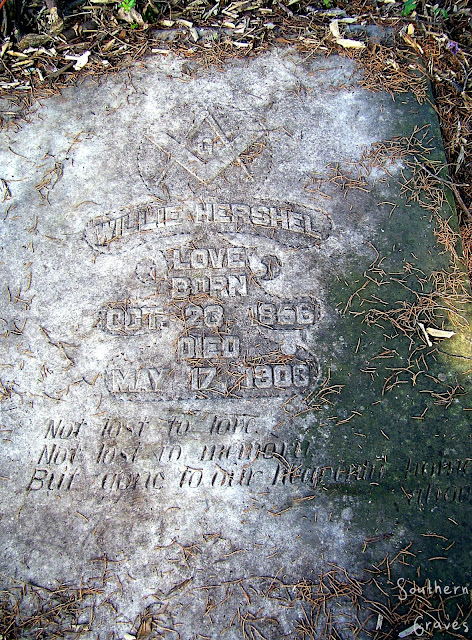 "Willard H. Love is Dead.
Mr. W. H. Love died at his room at the Phoenix Hotel, Waycross, Friday night, last, May 15th, at 11 o'clock, of congestion of the brain.
Mr. Love came in on a late train, Thursday night from Jacksonville, apparently in usual health and retired at once. Next morning he did not come down to breakfast, but nothing was thought of this, as he often left the city on one of the early trains. About 5 o'clock in the afternoon, as his door was still locked, it was forced open and Mr. Love was found in an unconscious condition.
Prompt measures were taken to restore him, but he never regained consciousness, and died that night at 11. A telegram was sent his family in Tifton, and they went to Waycross on the first train Saturday morning.
The remains were carried through Tifton to Fort Valley Saturday night, for interment there beside his father and other relatives.
At Tifton the party was joined by an escort from Tifton Lodge No. 47, F. & A. M., headed by Worshipful Master G. L. Blalock, accompanied by T. J. Parker, J. B. C. Blitch, S. M. Clyatt, S. N. Adams, G. W. Conger, J. Henry Hutchinson, T. H. Mathews, J. T. Mathis, G. H. Sapp and S. S. Monk. The Atlantic Coast Line furnished a special private car and free transportation for the family, relatives and Masonic escort.
At Fort Valley, the remains were met by a delegation from the Masonic Lodge of that place, and the interment took place after the due form of the order, Messrs. Clyatt, Hutchinson, Blitch, Adams, Parker, and Mathis, of Tifton Lodge, acting as pall bearers.
Mr. Love was about 44 years of age, and for nearly twenty-five years of his life worked for the Plant System, later the Atlantic Coast Line. He had risen from a flag station operator to various positions of honor and trust, and at the time of his death was special personal inquiry agent for the Coast Line, in which capacity he had worked hard all the day preceding his death.
He was the charter Mayor of Tifton, and during the infancy of the corporation, was one of its leading and most progressive citizens. He was first to organize a bank here, and also its first wholesale grocer. His business career marked a red letter era for Tifton as a trade centre.
Mr. Love leaves a wife and three children, two sons and a little daughter. One of his sons, Henry, is an apprentice in the Coast Line shops, at Waycross, while the other, Claud, stayed in Tifton with his mother. Mr. Love's occupation kept him on the road nearly all the time, but he usually spent Sunday with his family here. Besides his family, he leaves two brothers, J. E. B. Love, of Kirkland, and George J. Love, who lives near Tifton.
Mr. Love leaves valuable property in Tifton and $9,500 life insurance to his family.
He stood high in Masonic circles, and while a man of vigorous personalty, had many friends all over Georgia, whom the Gazette joins in extending sympathy to the bereaved family."
-- Tifton Gazette (Georgia), 22 May 1903
Willie's wife Absley Jane was later laid to rest next to him in Oaklawn Cemetery. 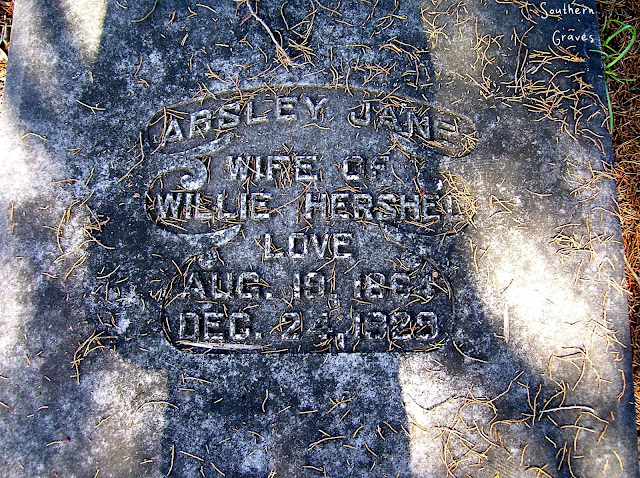