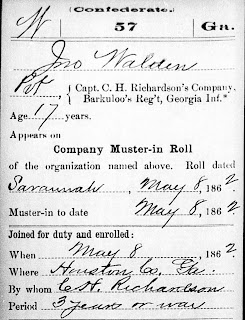 John Clayton Walden was born 26 March 1846 in Georgia to John M. and Elizabeth Walden. On 8 May 1862, at just over 16 years of age, the younger John was mustered in as a private in Company E (captained by C. H. Richardson) of the 57th Regiment, Georgia Volunteer Infantry. John's Civil War service record ascribed to him the age of 17 years at the time. Bet he fudged a little bit.

In his history of the 57th titled Hell's Broke Loose in Georgia*, Scott Walker wrote the following about the Battle of Champion Hill / Baker's Creek:

As the men of the Fifty-seventh Georgia crossed Baker's Creek late on the night of May 16 [1863] and raced through the dark for the Big Black River [Mississippi], they were no longer strangers to such tragedy and horror. Their memories were scarred forever by the early days of the Vicksburg campaign.

And this portion he wrote about the Siege of Vicksburg:

As soon as [General] Grant resigned himself to a siege, he ordered his engineers to begin moving the Union lines closer to Vicksburg by using assault trenches...The trenches were zigzagged to keep the Rebs from firing down their length...

[Union General] Lauman also deployed snipers. Exposed soldiers risked instant death. John Walden Jr., a young private in the Fort Valley Infantry, Fifty-seventh Georgia, was not aware that his anxious father had caught a train for Vicksburg to check on his son and bring supplies to the Fort Valley troops. Union sentinels stopped the senior Walden upon his arrival in the Vicksburg vicinity and denied him passage through the lines. He waited helplessly for days for word of his son.

After a particular fierce shelling, young John Walden peered over the trench line for a brief moment. A Yankee sharpshooter placed a bullet cleanly through his forehead. Only after Vicksburg surrendered did his waiting father learn of his son's death and burial. Because of the war the grief-stricken father could not take the corpse home. Instead, the elder Walden returned home with the Fort Valley Infantry after the Vicksburg surrender and erected a simple monument in his son's memory that stands today in Fort Valley.

As you can see, the white bronze marker states Pvt. Walden was killed in the Battle at Baker's Creek (a.k.a. Champion Hill). This same information is found in the young soldier's service record. 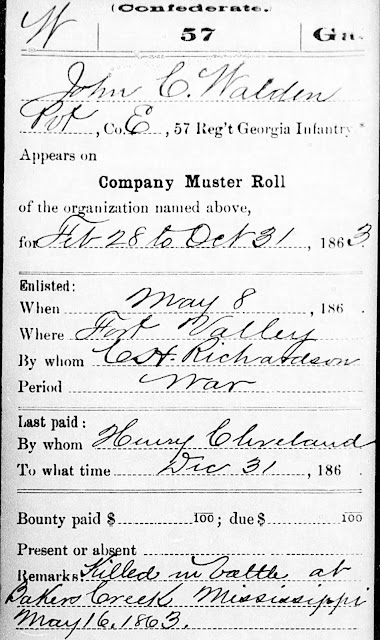 For the passage in Mr. Walker's book, he cited "Governor Treutlin [sic] Chapter of the Daughters of the American Revolution, History of Peach County, Georgia, 81." I have used this reference book before in a library, and would love to quote from it, but don't have a personal copy. (To be clear, I have no reason to doubt Mr. Walker or his source.) It's difficult to know for sure whether young John survived a few more weeks and made it all the way to Vicksburg.
Inconsistency aside, it is clear John Clayton Walden was a brave young man. And to say his father was grief-stricken over his loss is likely an understatement.
Also memorialized on the same white bronze marker in Oaklawn Cemetery at Fort Valley, Georgia were three brothers of the young private: Henry Thomas Walden (1849-1852), George Virgil Walden (1854-1855), and Pleasant Pierce Walden (1858-1859). This family endured much sorrow. 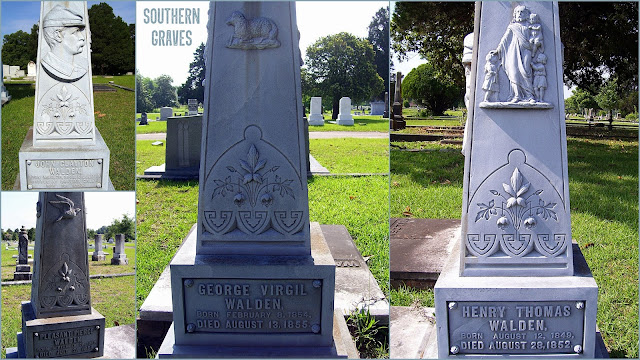 (*As an Amazon Associate I earn from qualifying purchases.)