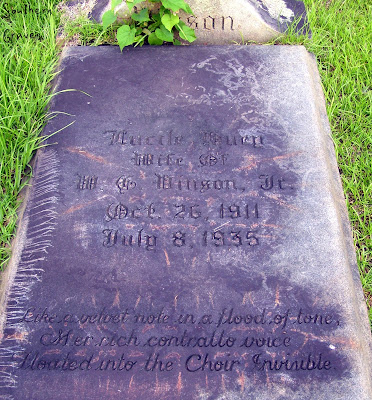 I'm usually not a big fan of Old English lettering on gravestones, but in this instance, it seems quite apropos.

Lucile Huey was born 26 October 1911 in Georgia to Lena Varn and L. M. Huey. She was a graduate of the Wesleyan (Macon, GA) and Cincinnati conservatories of music. Per a portion of her epitaph, it seems Lucile was a gifted classical music singer -

Like a velvet note in a flood of tone,
Her rich contralto voice
Floated into the Choir Invisible.

When Lucile was 22 years of age, she married Georgia Tech graduate William Edward Vinson (1908-1982). He was connected with the Ford Motor Company plant in Atlanta, and the young couple made that city their home.

Lucile and William had been married about 13 months when she made a fatal decision to drink carbolic acid on a summer morning in July 1935. Lucile died that same evening at the Georgia Baptist Hospital. Her death certificate deemed the "injury" a suicide.

Poison Dose Proves Fatal To Mrs. Vinson
Macon, Ga., July 10. -- Mrs. W. E. Vinson, 23, of Atlanta, the former Miss Lucile Huey of Macon and graduate of Wesleyan conservatory, died in an Atlanta hospital Monday night as a result of a dose of poison during the morning, it was learned here yesterday through Atlanta police reports.
According to Atlanta police reports Mrs. Vinson was driving in a residential area of the city, stopped at a house and told occupants she had drunk poison. She was sent to a hospital where she died several hours later.
The former Macon girl [h]ad come here Saturday to testify for her mother, Mrs. L. M. Huey, in a hearing before Judge Malcom D. Jones in Bibb superior court on a petition for injunction brought by Carl Gregory, Mrs. Vinson's brother-in-law. The latter claimed Mrs. Huey had violated a partnership agreement in connection with operation of a sandwich shop and soda fount [sic] on the first floor of the Georgia Casualty building and had assumed control to his exclusion.
...She had been married a year and a month to Edward Vinson, formerly of Fort Valley and now associated with the Ford Motor Company's Atlanta plant. Other survivors include her parents and two sisters, Mrs. W. J. Bradley, Jr., and Mrs. Gregory of Macon.

Though her death certificate provides a burial location of Macon, Georgia, Lucile was actually laid to rest in Oaklawn Cemetery at Fort Valley. May she rest in peace.