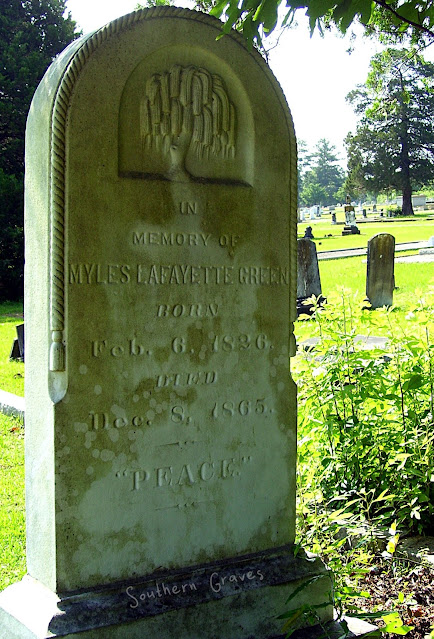 Obituary.
MYLES L. GREENE was born February 6th, 1826, and died in Fort Valley, Ga., Dec. 8th, '65.
He joined the M. E. Church in early life, but never became a decided, experimental, active and zealous christian, until he was the head of a family. From this time, the family altar was erected, and his pious fidelity continued during his entire after life. He served God long, zealously, and faithfully, in the useful and honorable stations in the church of steward, class-leader and Sabbath-school superintendent. His affectionate interest for the religious training of the young, especially of little children, was deep and lasting. His efforts also, for the spiritual instruction and welfare of the blacks, were efficient and laudable. Being blest by Providence, with ample means, and being actuated by a powerful sense of his obligation in this regard, he was characterized by a large and generous liberality towards the support of the gospel and all its benevolent enterprises. Truly was exemplified in him, the announcement of the divine oracle, "the liberal deviseth liberal things, and by liberal things shall he stand." His kindness and charities to the poor were generous yet unobtrusive. He was a most tender and affectionate husband and father, and an upright christian master. Being entrusted for many years with the management of the large estates and interests of several of his orphan nieces and nephews, he was distinguished in the administration of this trust, by unexceptionable integrity, discretion and success. In all temporal affairs, he endeavored strictly and perpetually to have an eye single to the glory of God, and to the good of those committed to his care and of those with whom he conducted his transactions. The last scenes of his life were most touching. In view of these, all who were privileged to be present, were impressed with the truth of the sentiment that "the chamber where the good man meets his fate, is above the common walks of life quite on the verge of heaven." During a long and painful illness, he exhibited the christian's humble resignation. When on the verge of death's cold stream, he took an affectionate farewell of all his loved ones. He kissed his little children, and praying for each one separately, bade them meet him in heaven. In answer to the inquiries of his sorrowing friends, he gave the assurance that, "if it were God's will for him to live he was willing; if to die, he was willing; he had no will of his own, his will was lost and swallowed up in the will of God." In this happy frame, he breathed his soul away sweetly and peacefully into the arms of the Lord Jesus. In the death of Bro. Greene, one of the pillars of the spiritual temple on earth has been removed to the eternal temple above. We would not depict him as incapable of mistakes, or as free from all errors. But, it may most truthfully be said that the great fundamental principle of his character, was to do right and to please God in all his ways. One of Zion's bravest and most zealous banner-bearers has fallen; -- but, it is a delightful consolation to reflect that his pure and happy spirit has ascended to the heavenly places forever to join in the song of victory and eternal praise. -- T. B. RUSSELL.

An incongruous statement included in the obituary above jumped out at me (though it's doubtful the author thought it so) -- "His efforts also, for the spiritual instruction and welfare of the blacks, were efficient and laudable."

(*As an Amazon associate I earn from qualifying purchases.)