By S. Lincecum 05 August
Silver-tongued orator -
An eloquent and persuasive speaker. This term has been around since the sixteenth century, when it was applied to the preacher Henry Smith (ca. 1550–91) and to Joshua Sylvester (1563–1618), a translator. Silver has long been equated with something fast-flowing and dazzlingly bright, and thus is a natural metaphor for eloquent speech. The best-known recipient of the epithet “silver-tongued orator” was William Jennings Bryan (1860–1925), who not only was a wonderful speaker but advocated the free coinage of silver; he won the Democratic presidential nomination in 1896 as a result of a speech in which he said, “You shall not crucify mankind upon a cross of gold.” -- The Dictionary of Clichés by Christine Ammer (2013) 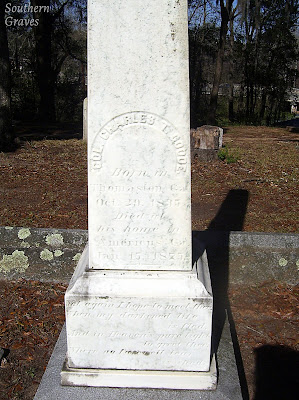 Col. Charles T. Goode was the son of Hon. Thomas W. Goode, of Upson county. [He was born in Upson county] about the year 1834 or 1835, and resided there until a short time previous to the war. He married a daughter of Gen. Eli Warren, of Houston county, and moved to that county. He graduated at the State University in 1853, and entered upon the practice of the law several years thereafter. When the 'war between the states' broke out he entered into the Confederate service, and was elected major of the gallant eleventh Georgia. Owing to a severe affection [sic] of his eyes, he was compelled to resign, but before they were scarcely restored he re-entered the service as major of a battalion of Partizan Rangers, and at Chattanooga the battalion was consolidated with an Alabama battalion, under the name of the 'Tenth Confederate Cavalry,' and Major C. T. Goode was made colonel. He did gallant service until the close of the war, and the writer, who was in his command, bears testimony to his courage and devotion. 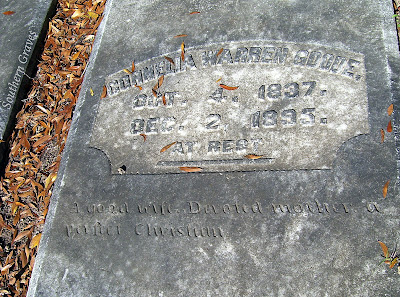 Colonel Goode was a fine lawyer, possessing an active intellect and a quick mind. As a debater and orator he had few equals. He spoke with ease, grace and fluency. He was generous in his impulses, and noble in his instincts. Fo truthful, honest manhood, he had no superior. He was genial in his manners and brilliant in his conversation. Brave as a lion in the defense of right, his heart was melted to tears at human woe, and the stricken, bereaved and oppressed found in him a sympathizing friend. Like the truly brave man he exemplified the lines of Bayard Taylor:


'The Bravest are the tenderest,
The Loving are the Daring.'

The news of his death will cause tears of regret to flow down the cheeks of all his surviving comrades in arms.

South Georgia can sympathize with North Georgia in her bereavement as they mourn the loss of two gallant sons, while every section of that State feels the common loss. Let us honor them by imitating them in their devotion to duty, to principle and honor. -- Constitution, 11th.

Colonel Goode.
The Macon Telegraph, of Saturday, in announcing the death of this gentleman, pays the following beautiful and just tribute to his genius:

Thus has passed untimely away one of the most brilliant men in the State, one whose gifts were sufficient to lift him to any position of grandness, beside the nobility of genius, whose titles come of their achievements, and not of their birth. He was a scholar and an orator. We had few such orators. His eloquence was like the flight of an eagle -- strong, steady and upward, never failing or flagging; but on and on until the eyry was reached upon the mountain top which is forever bathed in the light of the sun. Alas! that he should have been so cut off -- in the meridian of manhood and in the morning of his renown. His work was hardly begun, when it was ended; his sun had hardly arisen when it set.

And Col. Jones, one of the editors of the same paper, writing from Atlanta, adds the following:

CHARLES T. GOODE.
A brilliant light went out when the spirit of this glorious genius winged its flight to the 'dread unknown.'

Brave and chivalrous as any paladin of old, the warm friend, genial companion and incomparable orator, a magnetic influence ever accompanied his presence, and none knew but to admire him.

Hundreds will never cease to remember the address of Colonel Goode last summer, during the commencement of Mercer University.

It was almost faultless in matter and delivery, and the changing formations of the kaleidescope never revealed more varied combinations of grace and beauty. The thoughts of the speaker fairly sparkled like diamonds, while no wizard's enchants ever cast a more potent spell o'er the hearts of his vast auditory. Men and women listened, enthralled and delighted, and hardly a solitary topic in the field of letters, science and the arts but received some divine touch and illumination from his plastic hand. That effort alone was sufficient to stamp Charles Goode as one of the first among our living orators. But he, too, has gone 'to that bourne from which no traveler returns,' and we can only exclaim: Requiescat in peace. 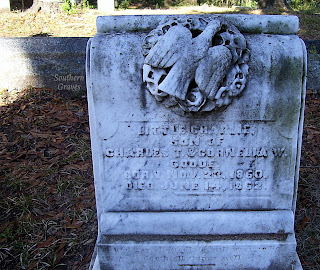 Children of Charles and Cornelia: