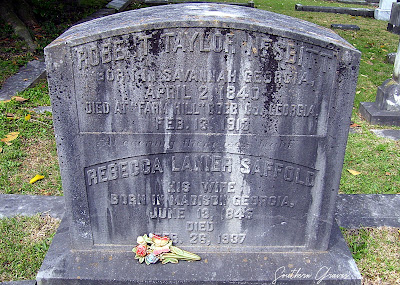 He was a son of Hugh O'Keefe Nesbitt and Martha Berrien. A biographical sketch follows the obituary.
Marrietta Journal (Georgia)
Friday, 21 February 1913

COL. R. T. NESBITT RESTS IN EPISCOPAL CEMETERY
Confederate Veterans, Daughter of Confederacy and Masons Join In Final Tribute to Well Known Citizen.
Col. Robert Taylor Nesbitt passed into rest last Thursday evening February 13th. He was perfectly resigned and talked to his wife about his funeral, asking that it be from Union Chapel so his neighbors could all be there. Just before the end he awoke from a light sleep and assured Mrs. Nesbitt that their only daughter, who died long ago, had come to him and his face shone with joy. He and his devoted wife had 'walked hand in hand from dawn till dusk, each evening nearer paradise,' for nearly fifty years and his only regret at leaving was that she would miss him. He was conscious and bade her a tender farewell while their two sons, their niece, and Mrs. Nesbitts [sic] two sisters stood near in sypathetic [sic] tears.
Col. Nesbitt had been first a sincere Christian, a gentleman in society to rival a Chesterfield, a patriotic wearer of the Confederate Gray and a friend beloved by hundreds. 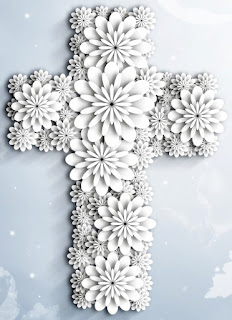 The funeral was conducted by Dr. J. H. Patton in the Union Chapel which was built by Col. Nesbitt's mother, Mrs. Duncan, and of which he was a trustee. The hymns which he had selected were sung by the choir of the Presbyterian church: 'Amazing Grace,' and 'There's a Light in the Valley.' Among the floral tributes was a cross of white roses and hyacinths edged with ferns and tied with the royal colors of the Ladies Memorial Association and the laurel wreath of the Daughters of the Confederacy with its tricolored ribbons. The members of these organizations attended the services in a body.
The interment was in the Episcopal cemetery and the pall bearers were D. C. Cole, J. W. Glover, B. G. Brumby, W. A. DuPre, G. P. Reynolds and T. L. Wallace. The honorary escort of Confederate Veterans included J. B. Glover, R. C. Irwin, M. R. Lyon, E. Christian and S. A. Anderson.

The following biographical sketch was published in Memoirs of Georgia by the Southern Historical Association, 1895.

ROBERT TAYLOR NESBITT, present state commissioner of agriculture of Georgia, was born in Savannah, Ga., April 2, 1840. His father, Dr. H. O'K. Nesbitt, of Augusta, was a thoroughly educated physician, having spent several years abroad, principally in Paris, preparing for his life-work. Returning to this country in 1838 he met and afterward married Martha Deloney Berrien, which event changed the whole tenor of his life. Miss Berrien was the daughter of Dr. Richard M. Berrien of Savannah, youngest brother of John McPherson Berrien. Dr. Berrien, already distinguished in his profession, died at the early age of twenty-five, a victim to the yellow fever scourge of 1820. He remained at his post in Savannah and after ministering to many sufferers of that fearful epidemic, himself fell, a sacrifice to duty. At the time of Miss Berrien's marriage to Dr. Nesbitt the bulk of her property was in lands and negroes and, as was so often the case, the responsibility of their charge caused an entire change in Dr. Nesbitt's plans. He gave up his cherished project of becoming a distinguished physician and devoted himself to the care and development of his own and his wife's estate. It will thus be seen that R. T. Nesbitt, the subject of the present sketch, was from his earliest infancy associated with agricultural pursuits, and the tastes which he developed for a planter's life were thus fostered by both education and environment. The earlier years of his education were conducted in Athens, Ga. Afterward his parents moved to Marietta, where his studies were prosecuted under the most competent teachers. His father died while he was still a youth, leaving him the protector of his widowed mother and his two sisters. Under the care of a tutor he was prepared for college. Entering college at Davidson, N.C., then under the presidency of Dr. Morrison and during the professorship of Maj. (afterward Gen.) D. H. Hill, he spent two years. He then took charge of the planting interests of his mother, his sisters and himself, in Early county, Ga. At the beginning of the war between the states he had just attained his majority. Leaving his business in the hands of agents, he enlisted in the army, and in July, 1861, went as a private with Cobb's legion to Virginia. The terrible experiences of the campaigns during the four years of bloodshed and suffering almost shattered his health, which had been gradually undermined by hardship and exposure, and he has always suffered from its effects. On May 4, 1865, he was married to Rebecca Lanier Saffold, daughter of William O. and Mary L. Saffold, and granddaughter of Judge A. G. Saffold and Gen. Jeptha V. Harris. From the time of his marriage until 1882 he planted in Early county, Ga., and a part of that time also in Henry county, Ala. In 1882 he moved with his family to Cobb county, Ga., where he has farmed ever since. He was elected in 1868 to and served a term in the state senate from the ninth district. In 1890 he was elected to the office of state commissioner of agriculture, which he now holds and to which he has been twice re-elected, having performed its responsible and intricate duties with credit to himself and satisfaction to the people.

Born in Athens, Ga.
Wife of Robert Taylor Nesbitt.
Descendant of Douglass Watson, John Porter, Oliver Porter, William Saffold, and Walton Harris.
Daughter of William Oliver Saffold and Mary Louisa Harris, his wife.
Granddaughter of Adam Goudyloch Saffold and Anne Porter, his wife; Jeptha Vining Harris and Sallie Hunt, his wife.
Gr-granddaughter of William Saffold and Anne Goudyloch, his wife; Oliver Porter and Margaret Watson, his wife; Walton Harris and Rebecca Lanier, his wife.
Gr-gr-granddaughter of John Porter and Mary Anthony, his wife; Douglass Watson and Margaret Park, his wife.
Douglass Watson (1750-77) was a Virginia soldier and was given a land grant in Georgia for service during the Revolution. He was born in Virginia; died in Wilkes County, Ga.
Oliver Porter (1763-1838) enlisted when a lad in his brother William's company and served at the siege of Yorktown. He was born in Prince Edward County, Va.; died in Green County, Ga.
Also No. 50186.
John Porter served in the 5th regiment of Foot, commanded by Col. Josiah Parker. He was born in Belfast, Ireland; came to America in 1740 and died in Prince Edward County, Va.
Also No. 12470.
William Saffold received a land grant for his services from the State of Georgia, where he died.
Walton Harris (1739-1800) served in the army, and while absent from his home in Georgia it was burned by the British. His wife and children were forced to take refuge in a hay stack. He was born in Brunswick County, Va.; died in Green County, Ga.