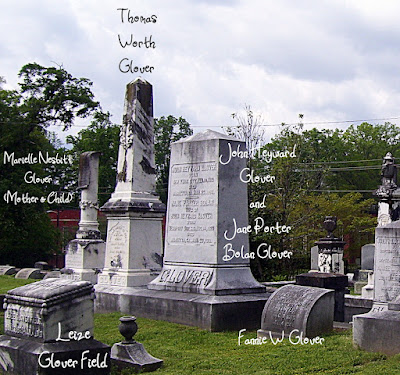 My Wife, My Child, My All.
God's Will Be Done.
Atlanta Constitution (Georgia)
Saturday, 9 May 1896

MRS. T. W. GLOVER IS DEAD.
WIFE OF HON. T. W. GLOVER DIES AT MARIETTA.
Great Grief in Her Home City and Many Houses Close -- Will Be Buried Tomorrow Morning.
A death that will touch many hearts with grief occurred at Marietta yesterday afternoon. It was the death of Mrs. T. W. Glover, the young, beautiful and lovely wife of Hon. T. W. Glover, many times mayor of Marietta and one of the most popular citizens of the state.
The death was one of peculiar sadness. Mrs. Glover was just in the bloom of youth and beauty and would not have been twenty-one years old until next July. She was a favorite in a wide circle of friends and the news of her death will fall as a terrible shock among those who knew and loved her.
Her death was not unexpected, as she had been critically ill for some months, but her family and friends never gave up hope to the last. She was given the benefit of the very best medical aid and was watched over constantly by loving relatives. Drs. Noble and Taliaferro, of this city, were with her from Wednesday morning until the time of her death. Dr. Letze, of Marietta, was also in attendance upon her. The devoted husband of the stricken young wife and many relatives and friends watched eagerly for a change in her condition, but none came, and she died at 2 o'clock yesterday afternoon. The entire town of Marietta was shocked by the terrible news and many business houses were closed during the afternoon.
Mrs. Glover was said to have been the most beautiful woman in Georgia and she was as bright and cheerful in disposition as she was beautiful. She was the only daughter of Colonel and Mrs. R. T. Nesbitt, and they were devotedly fond of her. She married Hon. T. W. Glover in 1893, and their life was a poem of wedded happiness until the fatal affliction which terminated yesterday in Mrs. Glover's death cast its shadow over the household. The blow of death was a terrible one for the loyal and devoted husband and it left him well-nigh maddened with grief.
Mrs. Glover left a bright little babe of two and a half weeks of age and just a few hours before her death she, on yesterday morning, called all her relatives about her and kissed them goodby. Then she took the little babe in her arms and kissing it she prayed that God would protect it and guard it. Shortly after this she sank into unconsciousness and never rallied again. The scene was one of unspeakable pathos and touched every heart that was present.
Mrs. Glover will be buried at Marietta tomorrow morning and the funeral will doubtless be one of the largest ever seen in that place. She was loved universally for her graces of womanhood, and all Marietta mournes her death. As Miss Marielle Nesbitt, she was a great favorite. She graduated from Agnes Scott institute.

An article published two days later about the funeral stated it "was attended by a very large crowd of citizens and friends, showing the great personal popularity of the deceased. The floral offerings were the most beautiful and numerous ever seen in this city."
One week after the mother's death and burial, precious little Marielle died.
(As an Amazon Associate I earn from qualifying purchases.)