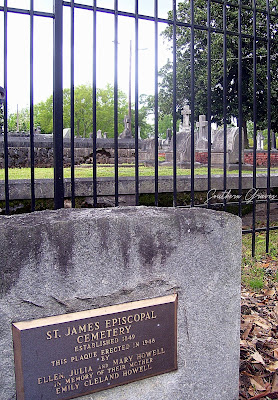 DEATH OF MRS. W. F. LAW
Mrs. Mary Ella Law died at her residence on Whitlock Avenue Saturday night. The funeral services were conducted from the residence on Monday afternoon, Dr. J. H. Patton officiating. 'Safe in The Arms of Jesus' and 'Some Day, Some Time We'll Understand' were the beautiful hymns sung by a quartet choir composed of Mrs. E. P. Dobbs, Mrs. Henry Wyatt, and Messrs. Vivian Waddell, and Hemp. The interment was in the Episcopal Cemetery, the pall-bearers being Messrs James Groves, A. S. Cohen, T. L. Wallace, Henry Wyatt, Claude Daniel and E. L. Faw, all officers of the Church she loved so well.
Mrs. Law was laid to rest beside the grave of her husband, Mr. W. F. Law, who died nearly four years ago. 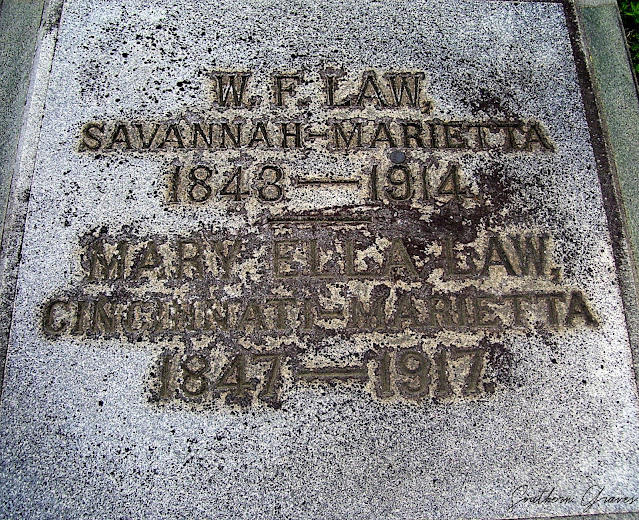 Those from a distance attending the funeral were Mrs. William Sleet, Mrs. Wlaker Glenn, Mr. and Mrs. W. F. Glenn, Mrs. Chas. Moody, Mrs. Groves Cohen, and Mr. Wm. Rosenberg, all of Atlanta.
Mrs. Law is survived by five daughters, Mrs. Seymour Avery, of Indianapolis, and Mrs. Leon Gilbert, Misses Kate, Marie, and Frances Law of Marietta; one son, Mr. John Stevens Law, of California; one sister, Mrs. Sam Anderson, of Montana; two brothers, Mr. T. B. Nichols, of Portsmouth, O., and Mr. Sam Nichols, of Hot Springs, Arkansas; four grandchildren, besides other relatives, to mourn her loss.
The floral offerings were remarkable for their beauty and profusion. A casket spray of double white petunias, starred with other delicate flowers, was given by her children, and every piece given by members of the family were of these same sweet double petunias. Handsome designs were also sent by the McNeel Marble Co., the officers of the Church, the Third National Bank, of Atlanta, etc. A sheaf of Shasta daisies, from the altar of St. James Church, was sent by the Rector, Mr. R. R. Claiborne. The room in which the remains were laid was a perfect bower of the most beautiful flowers sent by loving, sorrowing friends. They were a fitting tribute to one who had always had a peculiar devotion to flowers, and who was never happier than when working with the beautiful plants that responded gratefully to her loving care.
Mrs. Law was born in Cincinnati seventy years ago. Her maiden name was Mary Ella Nichols, and she was married to Mr. W. F. Law in Cincinnati. They moved to Marietta ten years ago, and the host of friends she had made here in that time was a testimony to her lovely character. 'She never had an enemy in her life.' 'She never was heard to speak unkindly of anyone.' 'She thought continually of others,' these are the remarks heard on every side of this saintly woman. And throughout her long and painful illness, during which she was nursed with untiring devotion by her daughters, she was never heard to utter one complaining or rebellious word.
A touching tribute was paid her by her pastor, Dr. J. H. Patton, in the services Monday. He spoke very comfortingly from the text 'I heard a voice from Heaven say, Blessed are the dead who die in the Lord -- they may rest from their labors, and their works do follow them.' He spoke of the consecrated, Christian life of this saintly woman, and of the sure reward that comes to those who are, as she was, true and 'faithful unto death.'