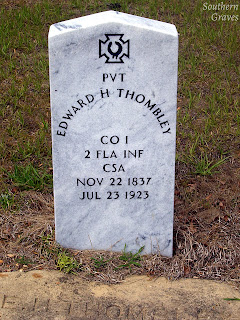 Edward Thombley was born 22 November 1837 in Dale County, Alabama to Thomas Thombley and Sarah Cross. On 4 June 1861, Edward enlisted in Company I of the 2nd Florida Infantry (CSA). He participated in the Battle of Gettysburg, was wounded in the right arm, and taken as prisoner on 3 July 1863. He was released from Fort Delaware after signing an Oath of Allegiance in June 1865.
After the war, on 10 January 1867 at Dooly County, Georgia, Edward married Martha Calhoun. She died on 24 November 1900. A tribute to the memory of Mrs. Thombley was published in the 20 December 1900 Vienna Progress (Georgia) -

In Memory of Mrs. Thombley.
On the 24th of November death visited our midst and took from us our dear aged grandmother, Mrs. E. H. Thombley. She was sick only a few hours when God called her to join his happy band. Although being sixty-eight years of age, she leaves a husband, brother, four children, a host of grandchildren and friends to mourn her loss. She had been a consistent member of the Primitive Baptist church for twenty-five years, and was always ready to fill the seat that will henceforth be vacant, for no other could ever take the place of grandmother, either at home or at church. 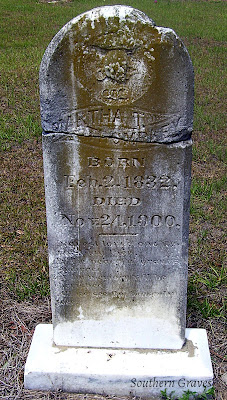 Oh! how sad to know we will never more see that smiling face, hear that sweet voice that has brought so much happiness to the heart of (one especially) in whose home she will be greatly missed. But cheer up dear grandfather, she is not dead but asleep in Jesus. Be consoled at the thought of her being a noble, Christian woman, true and patient until the last. Seeming to put all her trust in God, was always ready and willing to do something for the comfort and pleasure of others, never tiring or complaining, however hard her lot might be.
She was an affectionate companion, dutiful mother, grandmother and sister. Has lived a long and useful life, her object being to do right and help others do so.
While it is sad to part from our dear grand mother, we know she has gone to a happier home than ours. She has gone where congregations never divide nor Sabbaths never end.
She leaves our hearts all desolate,
God plucked our fairest, sweetest flower;
Transplanted into bliss she now
Adorns immortal bowers.
The bird-like voice whose joyous tones
Made glad these scenes of toil and strife,
Sings now an everlasting song
Around the tree of Life.
-- A loving grand daughter,
Addie Calhoun

A couple of years after the death of grandmother Martha, Edward married again. The bride's name was Mary Eugenia, and she was about 27 years younger than he. Yet, Edward outlived her, too. An obituary was printed in the 18 September 1908 Vienna News (Georgia) - 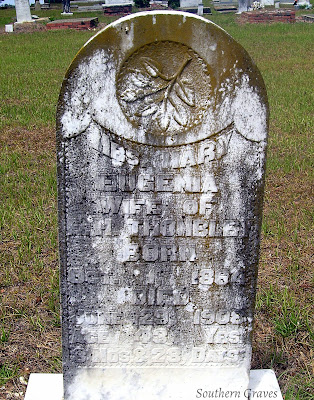 OBITUARY.
Mrs. Mary E. Thombley was born in Dooly County, Ga., Oct. 1st, 1864.
Was united in marriage to E. H. Thombley Jan. 7, 1902.
She lived to bless his home and comfort his life 'til June 29th, 1908, when she was released from her labors of love and taken home to rest eternal.
She leaves a husband[,] four brothers and two sisters, besides a host of relatives and friends to mourn her departure. Oh! 'tis sad indeed, to part with our loved one, yet, we humbly bow to this dispensation of His will and say with our Adorable Redeemer, 'Thy will be done.'
Her remains were interred at Pine Ridge Cemetery, there to await the resurrection morn, when Christ shall come and claim his own.
Every year the Father calleth
Some loved one to endless rest,
And the heart, though filled with anguish,
Can't help but cry, He knoweth best.
But a year not distant cometh
When we'll tread the vast unknown,
We shall find our ransomed loved one,
Seated 'round the great white throne.
Written by one who loved her dearly. BESSIE CALHOUN.

Like Mary Eugenia, both Martha and Edward were also buried in Pine Ridge Cemetery at Pinehurst, Dooly County, Georgia.