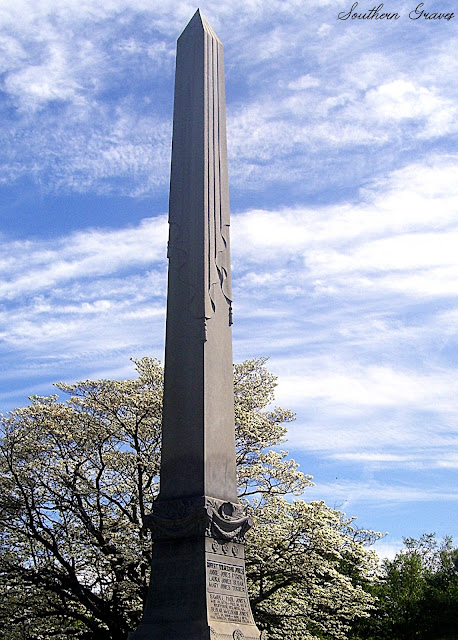 I wrote about the "noted evangelist" Samuel Porter Jones some years ago in this space. Here are obituaries for three of his six children: Robert, Annie, and Samuel Paul. All are remembered on the family obelisk in Oak Hill Cemetery at Cartersville, Bartow County, Georgia. Robert and Annie were buried there, while Paul was buried in West View Cemetery in Atlanta.
Cartersville News (Georgia)
31 January 1907

ROBERT JONES DEAD.
Son of Late Noted Evangelist, Sam Jones, Passes Away.
Robert W. Jones, second son of the late noted evangelist, Rev. Sam P. Jones, died at his home, in this city last Saturday morning at 2 o'clock, of pneumonia.
Robert professed conversion at the last tabernacle meeting. His father died soon after and the event made such a great impression on him that he decided to do all the good possible for his fellowman and made up his mind to go to preaching. He made feeling talks at the several churches of the city and impressed all with his deep earnestness. He then received invitations to hold meetings at some of the nearby churches in the country. Week before last, with Prof. Joe Arnold, who will himself enter the ministry, he was holding a meeting at Whites' Chapel. He came home Saturday night complaining of a severe cold. By Wednesday he was much better and seemed in a fair way to rally again. His case took a serious turn again, however, he became unconscious, and got worse continually until the end came.
Robert Jones' death was a very sad event in the community. He was a warm hearted young man and possessed the good will of everyone that knew him. His home people felt a deep interest in him since he decided to devote himself to work for the master. He received every possible encouragement in his purpose and efforts.
He leaves a wife and one son, Sam Jones, Jr.
The funeral, which took place Monday afternoon at the Baptist church was one of the largest that ever took place in the city. The court adjourned out of respect to the young man, to his family and respect to the memory of his distinguished father. There were many very beautiful tributes uttered and read.
On Tuesday the body was taken to Atlanta and there placed in a receiving vault beside that of his father to remain until they are both brought back to Cartersville for their final rest in Oak Hill cemetery. 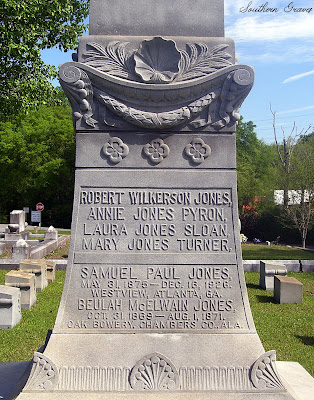 MRS. PYRON'S FUNERAL TO BE HELD TUESDAY
Cartersville, Ga., May 25. -- (Special.) -- Funeral services for Mrs. Annie Jones Pyron, who died suddenly here Saturday night, will be held at 10:30 o'clock Tuesday morning from the Sam Jones Memorial Methodist church, with Rev. F. A. Harris, presiding elder of the Dalton district, assisted by Rev. John Yarbrough, pastor of the First Methodist church, of Griffin, and Rev. W. H. Clarke and Rev. C. C. Cliedd, both of Cartersville, in charge of services. The church was built as a memorial to Mrs. Pyron's father, Sam Jones, a noted evangelist.
Mr. Pyron, formerly a well-known Georgia livestock dealer, and now manager of the Tufts' interests, with headquarters at Pinehurst, N.C., was first apprised of his wife's death when he read it in a paper at High Point, N.C., where he stopped while en route from his home to Winston-Salem. He arrived in Cartersville early Sunday.
Mrs. Pyron was well known throughout the state, and was a sister of Paul Jones, real estate editor of The Consitution. For many years she was organist for her father, and assisted him in conducting revivals. She had been associated with religious work practically all her life.

LAST RITES TODAY FOR S. PAUL JONES
Funeral services for Samuel Paul Jones, veteran Atlanta newspaper man and son of the late Rev. Sam P. Jones, noted evangelist of Cartersville, Ga., who died early Thursday morning at his home, 693 Lawton street, West End, following an illness of several months, will be held this afternoon at 2:30 o'clock from the chapel of M. M. Patterson & Son. The Rev. T. R. Kendall will officiate and interment will follow in West View cemetery.
...Mr. Jones was one of the best known figures in Atlanta newspaper work and had been connected with The Constitution for the past eight years. He also had done work with the Atlanta Journal and papers in Cartersville prior to that time.
Born at Rockmart, the son of the Rev. Sam Jones and Laura McElwain Jones, Mr. Jones received his early education at Rockmart and Cartersville, where his father made his home for many years, and also traveled extensively in Europe. He began newspaper work at the age of 20 years.
He first entered the newspaper field with The Journal. After working there for several years he moved to Cartersville on account of ill health. He was there for several years and when Billy Sunday came to Atlanta in 1917, The Constitution secured Mr. Jones to handle the daily stories of this meeting.
His work was considered of the highest type and he joined The Constitution staff permanently. Since that time he has been connected with the staff in various capacities. For the past few years he handled real estate news and was well known to all members of the profession in Atlanta.
Before beginning the real estate work, he was at one time city hall reporter and later special feature story writer for The Constitution. He covered many of the big stories during those years and was considered one of the most valuable writers on the paper.
Mr. Jones' pleasing personality won for him a wide circle of friends and he was known and loved by all members of the newspaper profession in Atlanta. He inherited a keen mind from his father and resembled his father in many respects.
He was a member of the Sam Jones Memorial Methodist church in Cartersville and took active part in church work.
He was the eldest of two sons, his younger brother, Robert, dying about 20 years ago, soon after the death of their father. Mr. Jones' mother died just a few months ago and he also survived one sister, Mrs. Annie Jones Pyron, who died two years ago.
Mr. Jones was first married to Miss Allie O'Neill. There was only one son to this union, Porter Jones, of Cartersville. He was married 16 years ago, sometime after his first wife's death, to Miss Leila Booker, of Atlanta. In addition to his wife he is survived by four children by his second marriage, Catherine, 15; Paul, 13; Howell, 10, and Anne, 9, and three sisters, Mrs. M. J. Turner, of Marietta; Mrs. Walter Holcomb and Mrs. L. J. Sloan, of Miami, Fla.