By S. Lincecum 09 September
I microblogged this on Twitter several days ago. Apologies if you've seen it before, but hopefully, there are some elaborations that are new. 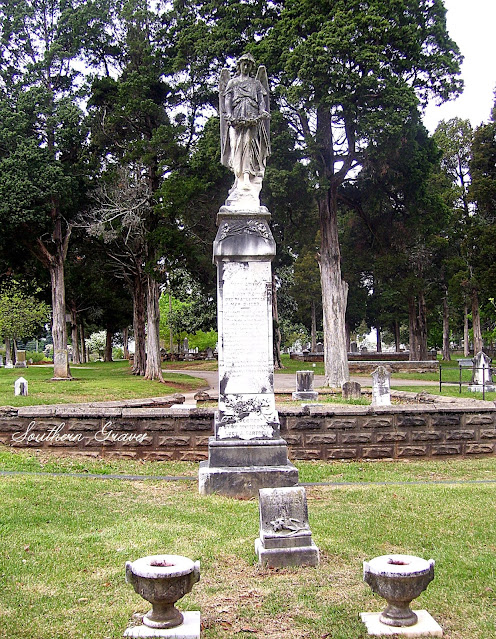 Mary Annie Gartrell, born in Cobb County, Georgia between 1861 and 1863, was a daughter of lawyer John O. Gartrell and Mary W. Randle. She grew up on a plantation near Kennesaw Mountain. By 1900, three Gartrell daughters were teachers: Mary A., Lucy, and Ina.
Annie died in Atlanta, Georgia 9 May 1906 after battling pneumonia for several weeks. An obituary in the Atlanta Constitution described her as "an earnest church worker in the Presbyterian church." It also noted she was survived by her father, three sisters, and a brother.
Burial was in the Marietta City Cemetery (also known as Citizens Cemetery). The towering monument was "erected by [Annie's] devoted sister Lucy A. Gartrell."
A portion of the epitaph reads --
She was the pride of her Father and Mother, the idol of her Sisters and Brothers. A dutiful, affectionate daughter. A loving, kind, and devoted sister. A true friend. Her noble deeds of charity, combined with an amiable, discreet, refined, and kind disposition made her honored and loved by all who knew her. None knew her but to love her. None named her but to praise. A beautiful life which ends not with death. 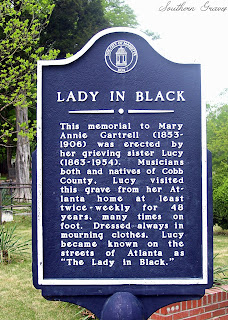 The Lady in Black
A marker placed by the city of Marietta adds some interesting information regarding the devotion of Annie's sister:

This memorial to Mary Annie Gartrell was erected by her grieving sister Lucy. Musicians both and natives of Cobb County, Lucy visited this grave from her Atlanta home at least twice-weekly for 48 years, many times on foot. Dressed always in mourning clothes, Lucy became known on the streets of Atlanta as 'The Lady in Black.'

On the one-year anniversary of the death of Annie Gartrell, the following was published in the Atlanta Georgian and News -

GARTRELL SCHOOL CLOSED FOR WEEK
The Annie Gartrell Memorial School will be closed for one week -- from May 9 to 15 -- it being the anniversary of the death of the late Miss Annie Gartrell, the founder and former loved and honored teacher of the school. Out of love and respect to her memory the building will be draped in crepe throughout May. Miss Lucy Gartrell, a sister, contemplates the building of a conservatory as a memorial.

I think Lucy might have followed through. I found this in the 27 February 1913 Atlanta Constitution (Georgia): It was billed as "A conservatory for main and comprehensive study of piano, vocal and violin as a practical and theoretical profession or as an element of culture...This is a young institution as yet, having been founded by a noted and distinguished musician, Miss Annie Gartrell herself, mainly as a charity work then, but to whose memory it now stands as a living monument."
The advertisement goes on to say, "Miss Lucy A. Gartrell, a devoted companion, sister, and a wonderfully accomplished musician, is giving her life to the building of this sacred educational monument, serving in the capacity of general directress and manager."
In February 1949, Celestine Sibley wrote an article about Lucy for the Atlanta Constitution (Georgia) under the headline, "Sister Never Forgets Mary Annie Gartrell."

Miss Lucy Gartrell is already preparing for her annual month-long pilgrimage to Marietta Cemetery.
During the month of May the tiny, black-clad little music teacher -- one of Atlanta's best-known citizens -- will journey to Marietta every day to place flowers on the grave of her older sister, Miss Mary Annie Gatrell...
'I have worn deepest black since that day,' Miss Gartrell said, 'and I always close down all business in May. The rest of the year I go to Annie's grave twice a week but in May I go every day.'

Atlanta's Famed "Lady in Black" is Dead
Lucy died at her home in Atlanta 10 March 1954 "following an apparent heart attack." It is said she was laid to rest in the same lot as her sister in Marietta City Cemetery, but there is nothing to mark the burial.
(As an Amazon Associate I earn from qualifying purchases.)