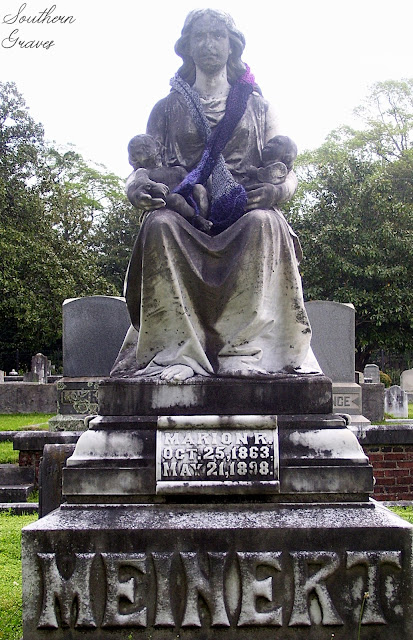 Marion R. Minor was born in Georgia 25 October 1863. She married German-born Henry Meinert in Chatham County, Georgia 27 September 1881. The couple successfully birthed four children before 1898. In April of that year, Marion and Henry welcomed twin baby girls. And that, possibly, was too much for Marion's body to bear. She died a month later, on 21 May 1898.
Marietta Journal (Georgia)
Thursday, 26 May 1898

THE DEATH ANGEL DARKENS A HOME.
Mrs. H. Meinert Died Last Saturday.
A GOOD AND TRUE WOMAN
Her Funeral Was Held Sunday Afternoon. Rev. J. H. Patton Conducted the Services.
Death has again invaded a happy home in Marietta and took a pure and good wife and a loving and devoted mother, Mrs. Marion Meinert, wife of our esteemed fellow citizen, Mr. Henry Meinert. The sad event took place on last Saturday morning about 11:30 o'clock. The deceased had been sick some four weeks, her lungs being involved. She was one of the most patient, lovable women in Marietta. She had a heart that sympathized with suffering humanity, and there is no one in Marietta who did more charitable work in visiting the poor and sick and ministering unto their necessities that [sic] did Mrs. Meinert. She was truly a disciple of Christ, and went about doing good.
She was in the 34th year of her age at the time of her death. She leaves a husband and six children, of the number twin girls four weeks old. The funeral services were conducted at the family residence on last Sunday afternoon at four o'clock, Rev. J. H. Patton officiating. There was a large number of our citizens present.
The casket was literally covered with flowers, some arranged in beautiful designs, offerings of friends.
The interment took place in the Episcopal cemetery...

The monument to Marion in St. James Episcopal Cemetery is of a woman holding twin girls. Though it is not recorded that the twins died and are buried with (or near) Marion, it is a possibility. A biographer notes the girls were not listed with the family for the taking of the 1900 census, and that it's "likely that they died soon after their mother."
A local legend involving paranormal activity and vandalism have at times plagued Marion's monument. The statue shedding tears on a full moon, and the sounds of Marion and her babies crying are a couple of claims. And pieces of the statue have been chipped off by jerks. Understandably, this extra attention has caused there to be increased security around the cemetery.
Though my image doesn't do it justice, the monument is still a beautiful one. (I so wanted to remove that scarf!)