By S. Lincecum 03 September
"The great and the good fall frequently around us. We are also mortal. Let us, therefore, learn the lesson proper for all men -- in life, prepare for death."
[Macon Telegraph (Georgia), 13 Feb. 1861, on the death of Hon. Charles J. McDonald, d. 1860] 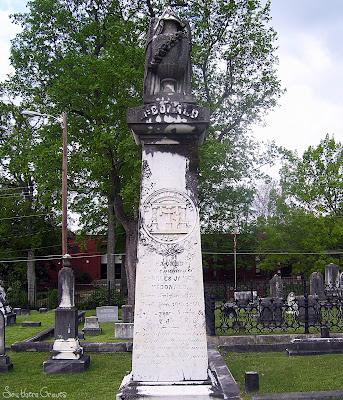 DEATH OF HON. CHARLES J. MCDONALD.
One of Georgia's distinguished citizens has fallen. The Hon. CHARLES J. MCDONALD, died at Marietta, Ga., on Monday last, December 17, aged about sixty-eight years. He was a native of South Carolina; but in his early infancy his parents removed to Georgia, and settled in Hancock county. Here, his early education was entrusted to Rev. NATHAN S. BEMAN, who was a well known and popular teacher at that day; and after completing his academic studies, Mr. McDonald entered the South Carolina College, where he subsequently graduated. He then entered the law office of Major JOEL CRAWFORD, and in 1817 was admitted to the bar -- entering upon the active duties of his profession in the following year, and obtaining, in a short time, a very extensive practice. 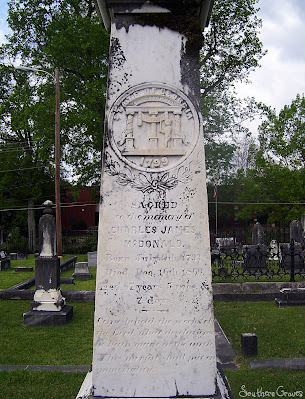 In 1822, he was elected Solicitor General of the Flint Circuit, and in 1825 he was elected Judge of the same circuit -- resigning the position of Brigadier General, to which he had been elected in 1823. In 1830, he was chosen to represent Bibb county in the State Legislature, and in 1834 and 1837 was elected State Senator.
In 1839, Mr. McDonald was elected Governor of Georgia, as the successor of Gov. GILMER. He found the finances of the State in a very embarrassed condition, but, by his recommendation, the policy was re-adopted of paying the taxes into the State treasury, thereby relieving it and the Central bank, which had been involved in these difficulties, of considerable embarrassment.
In 1842, however, there were further financial difficulties, and the Legislature having refused or neglected to make the required appropriations, the Governor 'directed the State Treasurer to suspend all payments from that department, except upon appropriations actually made, and warrants legally drawn thereon.' This measure created considerable excitement, and caused the Governor to be denounced in very severe terms; but the result was that the Legislature finally passed the bill; and the biographer from whom we quote, adds that at the subsequent session 'Gov. MCDONALD reported a greatly improved condition of the finances,' and 'that public confidence was reviving in regard to the Central bank, &c.' 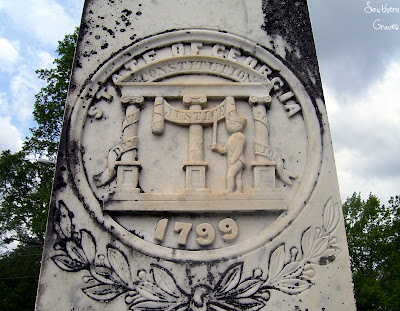 In 1840 he took prompt measures to repel the invasion of a party of Indians from Florida, who had invaded the counties of Camden and Ware, and afterwards procured from the General Government a recognition of the claim of Georgia to be re-imbursed for the expenditure that had been incurred in the protection of her citizens.
In politics, Gov. MCDONALD was a Democrat, and a strict constructionist; he was a friend of popular education, and an advocate of the doctrine of Congressional protection to slavery in the Territories of the United States. He was a delegate to the Nashville convention, and, in accepting that position, he said: 'If the Constitution of the Union were administered according to its letter and spirit, the South would not complain.' After the decision of the Georgia convention, which had resolved to acquiesce in the compromise measures, he regarded the controversy as settled, and declared that 'that decision ought not to be disturbed, however much it may conflict with individual opinions.' The last public position of this distinguished citizen was that of Elector for the State and large, on the BRECKINRIDGE and LANE ticket, in the late Presidential canvass, but his feeble health precluded the possibility of his taking an active part in its labors.
Gov. MCDONALD, says his biographer, has ever been governed, in public life, by the same principles of honor and stern integrity which have given lustre [sic] to his private character. His spirit has departed, but his deeds will live in history.

A biographical sketch of Charles J. McDonald was printed in The Sunny South (Atlanta, Georgia) over a two-week period, January 21 and 28, 1882. This is how it started:

BENCH AND BAR OF GEORGIA.
SKETCHES AND ANECDOTES.
BY R. W. D.
CHARLES J. MCDONALD.
NUMBER I.
The pen falters and hesitates as I try to drive it forward to the work of this memoir. It is no slight undertaking to write of a great and good man. It is serious in this instance because Governor McDonald needs no scribbler's hand to preserve his memory, and because the sketch, from its very meagreness, will, it is feared, more likely do injustice than justice to the subject. Of all the illustrious names, of whom we may hereafter write in these columns, none shine with greater lustre [sic] than that of CHARLES JAMES MCDONALD. In moral and intellectual worth he was the peer of any; in point of attainment to high position in the State, he exceeded them all.
Charles J. McDonald was the son of Charles McDonald, and was born in Charleston, S.C., on the 9th day of July, 1793. His mother was a Scotch lady, coming from one of the highest families of Scotland.

Gov. McDonald was buried in St. James Episcopal Cemetery at Marietta, Georgia. Near him is a daughter, Ella C. She was born to Charles and his first wife, Ann Franklin. This "lovely and dutiful daughter" died in 1855 at the age of 25. 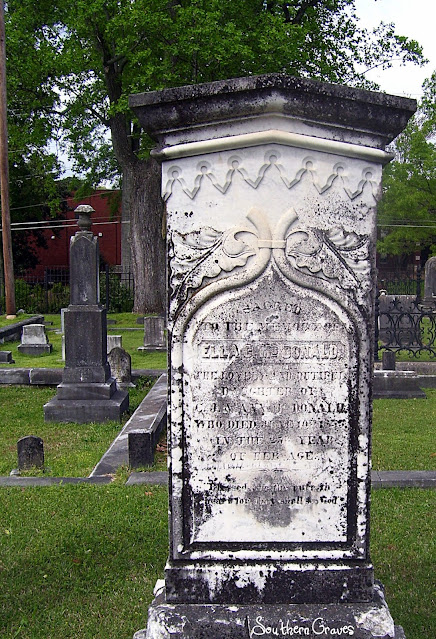