Death of a Patriarch: William Root, of Marietta, Georgia (1891) 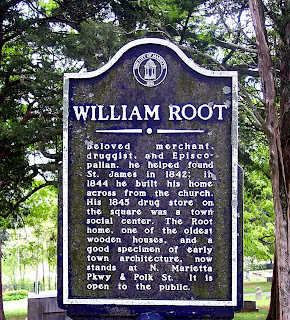 His drug store on the square was a town social center.
Atlanta Constitution (Georgia)
Tuesday, 8 September 1891

THE DEATH OF A PATRIARCH.
The Life and Career of William Root, of Marietta.
MARIETTA, Ga., September 7. -- [Special.] -- The death of Mr. William Root brought sorrow to the hearts of the large number of people of Marietta. He passed away this morning at 10 o'clock, at the residence of his son, Mr. Henry Root, of this city. Had he lived till January next, he would have reached the age of seventy-seven years. He was one of Marietta's first and oldest settlers. His birthplace was Philadelphia. From there, during the early years of this century, he moved to Augusta and stayed with, and perhaps was a partner of William K. Kitchens. He then engaged in the drug business in Augusta. From Augusta Mr. Root moved to Marietta, and in the year 1839 started up the old William Root drug store, now located on the north side of the square. He continued in business here until the year 1882, when misfortunes, for which he was not responsible, caused him to sell out.
He rode on the first train that ever came from Augusta to Atlanta. He received the first shipment of goods to Marietta on the Western and Atlantic railroad. He bought the first postage stamp ever sold at the Marietta postoffice.
He was senior warden of St. James Epicopal church, at this place, from its organization, in 1842, up to his death. He was superintendent of St. James Sunday school from its organization till about two years ago, when he had to give it up on account of deafness.
His funeral takes place at 10 o'clock tomorrow morning at the Episcopal church, after which he will be laid to rest. He leaves two children living -- Mr. Henry Root, of Marietta, and Mrs. Mary Holleman, of Palmetto, Ga. 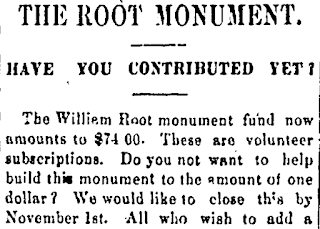 A plea was sent out to the citizens of Marietta to pool their resources and purchase a suitable monument to mark the grave of William Root.
Marietta Journal (Georgia)
Thursday, 10 September 1891

AN HONEST MAN.
The idea has been suggested and seems to be generally approved that our citizens erect a monument to the memory of Mr. William Root, who departed this life last Monday. We believe our people will be glad to pay this tribute to the memory of a good man -- an honest man -- one of the first settlers and oldest citizens of the town. It would be a just recognition of the virtues of a man who lived among us in all purity, gentleness and kindness. His smiling face was a benediction. He was a man against whom not a derogatory word could be justly said. Such a life as he lived is worth commemorating in gold, let alone in marble. He was a man who prospered as Marietta prospered, but in his latter years adversity laid its hand upon him. Now let there be a spontaneous offering on the part of our citizens -- say one dollar each -- and let us erect over his grave a creditable monument to mark his last resting place -- a tribute from those of our fellow citizen who admire the nobility of character which was so conspicuously exemplified in his life...

$128 was raised (roughly $3,840 today), the monument was purchased, and it was placed in the Marietta City Cemetery. 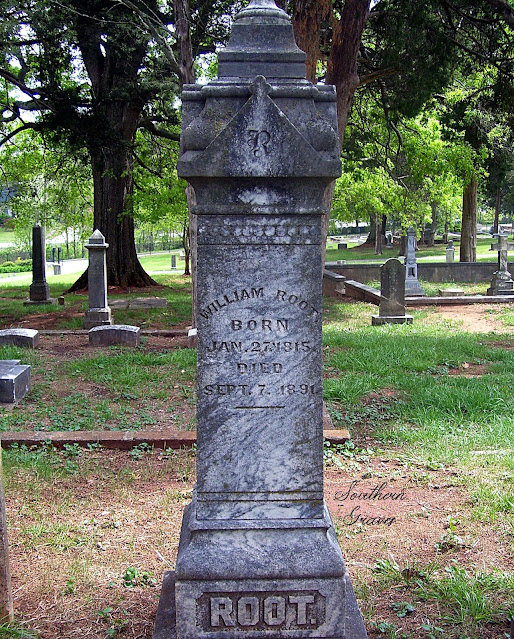