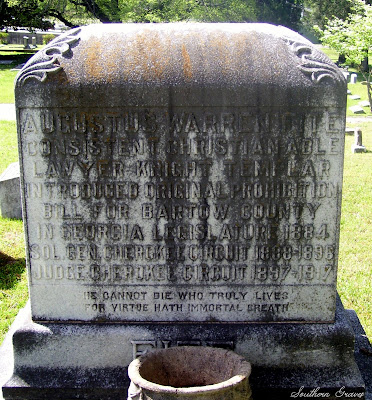 JUDGE AUGUSTUS W. FITE DIED SUDDENLY IN HIS OFFICE
Prominent Citizen of Bartow County for Many Years -- Had Led Vigorous Life and Was Active Until the Moment of His Death
Judge A. W. Fite, one of the most prominent citizens of Bartow county, and for twenty years judge of the superior courts of the Cherokee circuit, died suddenly in his office at the court house in Cartersville on the afternoon of Christmas day, aged 67 years. He was born June 15, 1852.
Judge Fite had taken dinner at his home and shortly after rising from the table was called to town by a client for a consultation. A little while after seating himself at his desk, and while talking to his client, Mr. Tom McHugh, of Pine Log, he raised his hand to his face and remarked that he was sick. Mr. McHugh asked him if he should send for a doctor, and receiving no reply, acted upon his own impulse and found Dr. Adair and returned to the office with him, but Judge Fite had died in the meantime and the physician was unable to do anything. Announcement of his death was made and the news spread rapidly over the county and state. The remains were later taken to his home and friends gathered to pay tribute and to keep vigil over the body of one who had played an important part for nearly forty years in the movements of the people of this section of Georgia.
Native of Gordon County.
Augustus W. Fite was born in Gordon county, the son of Dr. Henderson W. Fite. After quitting school he read law and was admitted to practice before he was twenty-one years of age. He was likewise elected a justice of the peace and thus, almost from the start of his professional life, became a judicial officer. He possessed untiring energy and a quick and alert mind, and vigorously entered into the conflicts of a law practice and the pursuit of politics.
In 1882 he became a member of the general assembly of Georgia, and served with many notable men of Georgia in the law-making branch of government. It is certain that he took an active part and was heard only recently to claim that he was the author of the first prohibition legislation ever enacted in Georgia.
During President Cleveland's administration he was appointed a deputy internal revenue collector and resigned when elected solicitor general of the Cherokee circuit by the legislature.
He was a successful and able prosecuting officer, his reputation made in this office paving the way for his first election to the judgeship of the Cherokee circuit by the legislature in 1896, his term beginning January 1, 1897.
He continued to serve as judge of this circuit by repeated elections until January 1, 1917, since which time he has actively practiced law, serving, however, for a period of several months during the recent war in the war risk insurance department at Washington.
Long on the Bench.
Thus the greater part of his public life was spent on the bench, and his decisions and judicial acts were frequently under criticism by the bar, the appellate courts and the press. He did not too highly respect precedent, and freely admitted it, but, on the contrary at times refused to follow the decisions of higher courts in order to make law conform to what he believed it out to be, rather than what it had been declared to be by a higher constituted authority. He apparently regarded his decisions as the supreme law of the land, and this course of action was by some regarded a virtue, by others a fault.
But it was in the practice of the law and in the conflicts of politics he revealed his greatest force and talent. He had a commanding nature, a quick mind and wonderful resourcefulness. Added to all this, was a great physical endurance and unremitting energy. He was always a power to be reckoned with, for he went the limit of mental conception to overcome his antagonist, and hesitated at no point short of accomplishment if it lay within human power. His was also an unyielding nature, but to his credit it may be said, if he refused to give quarter, he refused to ask it. He used every weapon within reach, and stopped not to consider the scope or effect of his battle. Yet, with all that, he possessed an engaging personality which enabled him to win back many who had sworn eternal enmity.
He was a Mason, an Odd Fellow and a member of the Junior Order. He belonged to the Cumberland Presbyterian church, but since that denomination is not represented in Cartersville he affiliated with and contributed to the Methodist church and attended its services. 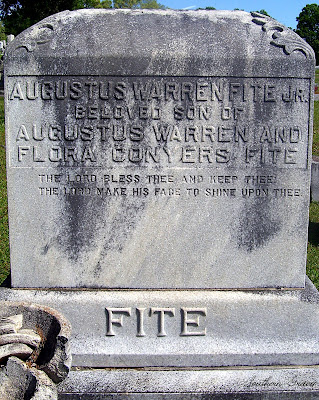 In 1880 he married Miss Florida Conyers, a member of a prominent Bartow county family, and is survived by his widow, four sons, Lieut. Commander Conyers Fite, U.S.N., now stationed at Manila, Philippine Islands; Augustus W. Fite, Jr., of Oklahoma; Joel Fite, of New York city, and Lindsay Fite, of Cartersville, and Sarah Fite, of Cartersville; also by three sisters, Mrs. Dr. Treadwell, of Texas; Mrs. Robert Bradford, of California; Mrs. Mary Montgomery, and two brothers, Dr. R. L. Fite, of Tallequah, Okla., and Dr. Francis Bartow Fite, of Muscogee, Okla.
Funeral Held Sunday.
The funeral services were held at the Sam Jones Memorial Methodist church Sunday morning, and the large auditorium was filled with friends and admirers from his home city and county, and other counties in the Cherokee circuit. The Masons, Odd Fellows and Junior Order attended in bodies, as well as the members of the Bartow county bar and lawyers from other counties, who, headed by Judge M. C. Tarver and Judge G. H. Aubrey, were assigned a section of pews in company with the fraternal organizations.
The sermon was delivered by Rev. W. T. Hunnicutt, one time pastor of the Cartersville Methodist church, and now of Atlanta, Ga., and a warm personal friend of the deceased. Mr. Hunnicutt dealt with the problem of life and death, the trials and rewards of human existence, and closed a most eloquent sermon with a eulogy of the deceased which carried comfort and solace to the family and the many friends of the dead jurist.
The choir, composed of John W. Jones, Joseph S. Calhoun, Mrs. A. B. Cunyus, Mrs. J. B. Howard, Paul Gilreath and J. A. Miller, rendered during the service some very appropriate selections.
Masons in Charge.
At the close of the service and after the earnest and fervent prayer of Rev. Mr. Hunnicutt, the Masons took charge of the remains. The pall-bearers, Messrs. T. W. Tinsley, W. M. Graham, E. W. Smith, Thomas Lumpkin, J. J. Hill, William T. Townsend and Joseph S. Calhoun, gently carried the body to the cemetery, and at the grave the solemn and impressive burial service of the Masonic order was strictly carried out, officiating in this service being J. B. Howard, as worshipful master; W. T. Townsend, senior warden; E. G. Shaw, junior warden, and other officers of the Cartersville lodge of Free and Accepted Masons.