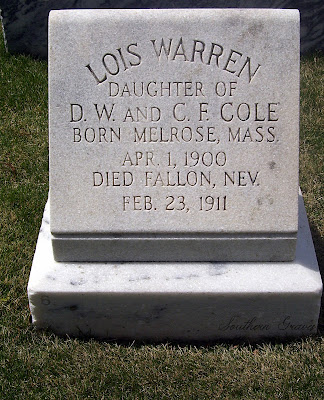 Till Christ Himself shall call thee
To lay thine armour by.
Marietta Journal (Georgia)
Friday, 10 March 1911

MEMORIAL SERVICE AT ST. JAMES CHURCH LAST SUNDAY.
The memorial service at St. James Church last Sunday morning by the rector, Rev. E. S. Doan, was impressively tender and comforting to all present. It began with tributes to the two little girls who were members of St. James Sunday-school, and who have passed away from us. One was Louise Weems, barely four years old, and the other Lois Cole, who was aged eleven. Louise was a tenderhearted, loving child, devoted to her Sunday-school and exercising a sweet influence over other children. She was the only daughter of her parents. Lois Cole was the daughter of Mr. and Mrs. Webster Cole, and was the constant companion of her elder sister, Georgia. Both were exceptionally bright and beautiful children and were dearly loved by every one. As the rector talked, near the retable, on which stood vases of calla lilies, he took as his subject the beautiful flowers which the Saviour once used as an illustration in His sermon on the mount. Mr. Doan compared human life to the growing lily. The dark, unlovely bulb is the earthly life that sinks into death as the flower's root goes into the ground. Bulbs spring into blossom as the sun's rays, in spring, touch them to life; and so do human souls ascend from paradise, which is a state of waiting, into Heaven, where everlasting bliss is found. This consoling, Christian doctrine impressively touched the sad hearts of the congregation with the incense of faith and patience and hope like the fragrance of the snowy lilies.

Louise was the daughter of Andrew Murray and Helen Wood Weems.
Daniel Webster Cole (1863-1958) was a civil engineer with the U.S. Reclamation Service, a federal agency that oversaw water resource management. Today, it is known as the United States Bureau of Reclamation. This occupation likely explains why he and his family moved around a lot. Daughter Lois Warren Cole was born 1 April 1900 in Melrose, Massachusetts. For the 1910 U.S. Federal census, Daniel and his family were recorded 6 May in Cody, Park County, Wyoming. And Lois died nine months later in Fallon, Nevada.
Lois and her father were buried in the Cole family plot of the Marietta National Cemetery.