Rev. Thomas Allen Dies at His Farm Near Marietta, Georgia (1909) 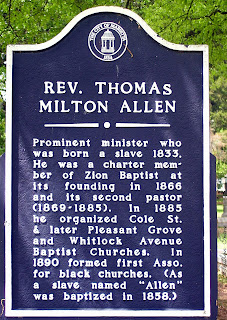 Thomas Milton Allen was a prominent minister who was born and enslaved in 1833. In 1890 he formed the first association for Black churches, the Kennesaw Baptist Association.
Marietta Journal (Georgia)
Thursday, 22 April 1909

NEGRO EX-LEGISLATOR AND MINISTER,
Rev. Thomas Allen, Dies at His Farm, Near Marietta.
Rev. Thomas Allen, a well-known colored Baptist minister, died at his farm home, near Marietta, on the 11th instant, aged seventy-six years.
Before moving to Marietta, he lived in Jasper county, Georgia, and represented that county in the Georgia legislature during the 'reconstruction period,' immediately after the late civil war. He was associated in the legislature with Bishop Turner, colored, when the storm of passion and misrule reigned.
Be it said to the credit of the memory of Rev. Thomas Allen, he was a conservative man, of probity and respectability, as his life in Marietta demonstrated. He served the Mt. Zion Baptist church here, as pastor, sixteen years, and there was nothing against him.
His funeral was conducted here by Rev. E. R. Carter, of Atlanta, and he was buried in the city cemetery. 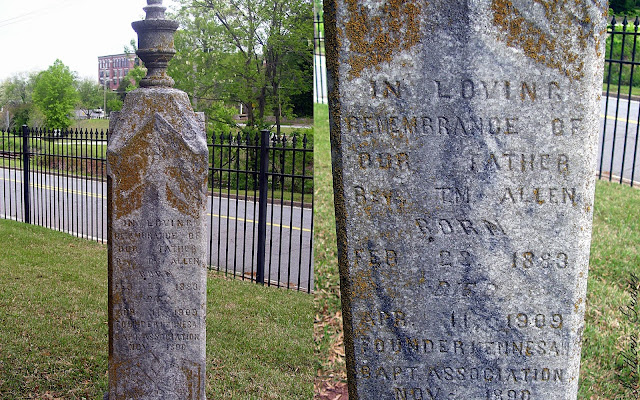 Bishop Turner, mentioned in the above obituary likely written by a white person, was Henry McNeal Turner (1834-1915). After the Civil War, he became politically active with the Republican party who, under Abraham Lincoln, emancipated the enslaved across the Confederacy. Turner helped found the Republican Party of Georgia and ran for office. He was elected to the Georgia Legislature in 1868, representing Bibb County.
The Democrats of the time regained control of Georgia and the South by the late 1870s, coinciding with violence at the polls and the repressing of Black votes. In 1883, the United States Supreme Court declared the Civil Rights Act of 1875 was unconstitutional. A portion of Turner's response:

"The world has never witnessed such barbarous laws entailed upon a free people as have grown out of the decision of the United States Supreme Court, issued October 15, 1883. For that decision alone authorized and now sustains all the unjust discriminations, proscriptions and robberies perpetrated by public carriers upon millions of the nation's most loyal defenders. It fathers all the 'Jim-Crow cars' into which colored people are huddled and compelled to pay as much as the whites, who are given the finest accommodations. It has made the ballot of the black man a parody, his citizenship a nullity and his freedom a burlesque. It has engendered the bitterest feeling between the whites and blacks, and resulted in the deaths of thousands, who would have been living and enjoying life today."
That is who Rev. Allen "was associated in the legislature with...when the storm of passion and misrule reigned."